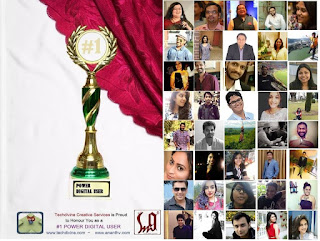 Being featured in Top Digital Influencer is something all who are into Digital Media Marketing thrive to achieve and when it comes from a company which is been in the business with it CEO being recognised globally, isn't a mean job.

When I got to know that I was shortlisted by Ananth V, CEO of Techdivine who is a Peter F Drucker Awardee, BBC Business Quoted Professional and many other to his hats, I was really thrilled.The process was really smooth for me though I came to know later that it took so much of efforts and research to zero in on the final list.

What made me equally glad was some of my friends like Amit Panchal, Shrinidhi Hande, Manish Pandey. Akash Nihalani, Divya Gattani, Piya, Avantika, Rajiv Verma, Nikhil Chaudhri, Zeb Fatima, Pratik Telang, Shreya Deshmukh were also featured along with me.

A saying goes like this "Do your duty without expecting anything in return and the rewards will follow". This recognition is a perfect example for this. I feel really happy and honoured of being recognised. My heartfelt thanks once again to Ananth V, CEO of Techdivine and the team who has put in so much of efforts towards this.

This is my First Ever Proper recognition in the Digital Medium space and would always remain SPECIAL to me, Forever.