1
Welcome to Sarath Babu's Lifestyle Blog Book Reviews The BE Book : A Journey into Miracles and Guide to Self-Liberation by Mynoo Maryel

The BE Book : A Journey into Miracles and Guide to Self-Liberation by Mynoo Maryel 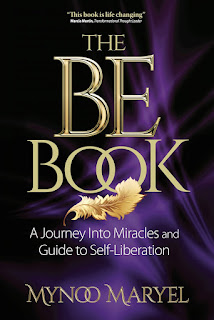 Have you ever read a book which you can consider it as a story, fiction, an autobiography, a Self-Help book and so on? I did not come across any till I read The BE Book by

This is a book which certainly differs from others as it has the essence of all the properties mentioned above. The author ha taken great care in bringing out almost all in minute detail without compromising on the flow. This is what that makes this book special since you will not feel bored right from the start till the end.

Let us see what this book is all about. As mentioned earlier, this book is a treasure chest containing innumerable information and I am going to talk only about the gist. Hope you would like reading it and thanks for your time.

The book is divided into 7 parts and 21 chapters. Each Chapter has its unique way of delivering the message which the author has intended to.

The book is all about one magical word BE. The lead character of this book is none other than the author Mynoo Maryel.

This part is set at the time period when Mynoo was 3 to 8 years old.

Here there are quite a few mentions on BE which includes

BE Me - Mynoo gets more time to spend with her mom.
BE Strong - Do not share your feelings. It is only for you to know.
BE Vigilant - No one could have a better control on you.
BE Enchanted - Always stay happy.

The part also talks about DIY/TIY (Do It Yourself / Try It Yourself) about the managed solitude. You must ask yourselves as to what you have learned for the day.

BE Learning - This is a never ending process.
BE Courageous - Never let down your courage on any circumstance.
BE Knowing - Always know that there is a way out.

Chapter 2: BE Fun, BE Fab, BE Fufilled, BE Strong, BE Independent, BE Rebellious

I guess the above ones are self explanatory. While part 1 as set up in , Part 2 was set up in Mynoo's ancestral village. This happened when Mynoo was between 8-11 years old. There was an incident which also remembered me of Kollywood Star Vijay's "Ghilli" where he goes out without anyone knowing from his room and Mynoo just did that.

This chapter was set up when Mynoo was 11 - 14 years old in . Here she starts talking about the palaces and also the secret passages she ends up discovering and exploring. During one such exploration, the passage seemed never ending and it had eventually lead her to the other side of the river amidst watermelon farms. The way this was described was really enchanting.

BE The Leader - Do not let down your followers. Follow your instincts.
BE Magical - Get immersed in the Magic and Wonder of Life.
BE Fine

The way how Mynoo tried to explore a maze and got stuck was just awesome. How did she find the way out?

Chapter 4: BE Free or BE Independent

Mynoo is in her teenage now. She falls in love with a guy and ends up marrying him too. Rather than continuing hr higher studies and finish doing Masters in Genetic Engineering, she lands up in a high paid job.

Things went well initially before her loving husband hits her for the first time. They were in Saudi by then and Mynoo was entrusted with opening a to educate the Saudi Women.

BE Creative
BE Open

In this chapter, Mynoo talks about 15 Minute Time Management. This is an effective tool to see you accomplish things you wanted to.

What really made me stunned was Mynoo meeting the exiled Ugandan Dictator Idi Amin in a hospital which showed even a ferocious dictator gets frustrated.

Mynoo divorces her husband since all was not well between them.

Mynoo gets attracted to Peter. They both had created lot of successful companies which was floated in the markets of and the EU. Peter suffers injury in the brain. Mynoo is now been burdened with managing all the show single handedly.

Read this chapter to know more about the ones mentioned above.

Mynoo takes the yoga camp of Baba Ramdev over the weekends in . She learns Yoga, Chanting and Meditation. As she suffers some ill-health., she was forced to take a three week off and travel to which is where the Self-Realisation begins.

On reaching , she learns that she will be the only guest for the first 2 weeks out of the 3 week vacation. Imagine her mindset by then...

Mynoo gets a question in her inner mind.

WHAT AM I TO DO NEXT?

BE Extraordinary Living My Life
BE Ease
BE Joy
BE Grace

In , Mynoo gets some amazing gifts from the visitors of the resort who came as a big group on the third week. She also gets a bed of nails from a Scandinavian hippie. The way she describes her first gift where she gets herself submerged into an ocean and seeking the help of a dolphin(her inner self) was surreal.

It is then she realizes that she needs to let Peter go from her life and arranges a happy separation party. Mynoo also reunites with her husband after 18 years.

Mynoo then sets off to again and ends up visiting 36 temples in 6 months.

Mynoo gets diagnosed with a lump on her breasts. She decided to BE Healthy and on the day f the surgery, when the can was taken, there were no traces of the lump.

Chapter 9: BE Present BE Real

Mynoo gets an invite to attend a seminar and when she gets a chance to speak on the mike, she notices that the CEO of an American Company who was presiding the Chair of the Meet was well asleep. Later she realizes that she was not sleeping and was offered the post of President in the American Company.

Mynoo's niece gets wedded. Just before that, Mynoo's sister suffered severe pain in her stomach and eventually her uterus gets removed. The entire operation procedure was seen by Mynoo who was in by then through her mind and the same set of visuals were present when she was given the DVD of the operation.

Mynoo contracts some infection now and her face gets swollen up. She believed that she could get well and did she able to achieve it?

Chapter 11: BE Love and BE Loved

Read the chapter to know more in detail.

This is one of my favorite part though I am not going to talk in detail because it is surely an eye-opener.  This talks in detail about What, How, Effect and Conclusion of the following.

PART 5: BE Cause or BE Lost

Chapter 14: BE Have or BE Gone

This chapter introduces Mynoo's tryst with poems. Here she has penned a poem in a beautifully worded sequence - The Journey of the Purple Flame

Mynoo's connect with Mt.Kailash and few other places were beautifully described in this chapter.

This chapter is also about Poems. They are self realization themed ones.

Chapter 16: BE Kind or BE Behind

You would find two more poems in this chapter too which were inspiring.

You are your Mother

This is the Time

PART 6: BE Live and BE Come

This chapter is about something amazing. Read it yourself to know as to what makes this chapter so special in pages 166 & 167.

In this chapter you will find about 7 different ways of addressing/approaching your problem which includes:

1. The Alphabet Game
2. Order of the Universe
3. Rampage of Gratitude
4. Rocket of Desire
5. Positive Aspects
6. Swallow your Smile
7. Vibe Music and Dance

Meditation:  Mynoo by now has learnt 321 different meditation practices and highlights three of them.

BEing in the Moment
Blessing of the Food

In this, Mynoo talks about the real life stories (names of the characters were changed due to privacy reasons) which includes:

This details out as to how Mynoo has used her Meditation Skills and connect to the Nature which made the above mentioned characters realize the root cause of their troubles and eradicate it.

There are two chapters in this which includes

Chapter 20 : Making the BE Move

My Take on this Book:

This is a combination of self-help, self-realization , connect with the nature which were weaved together by citing the real life examples of the author, Mynoo. Read it slowly and grasp the ingredients / essence because the word BE is a real powerful tool which is effective in the lives of all when put into good use in the right way as it is intended to be....

The book will be available soon in India. In the mean time, you can buy it here -> http://bit.ly/TheBeBook

Thank You so much Antonetta :-)