The BNO : Sex,Life and Hookah by Manoj Jain 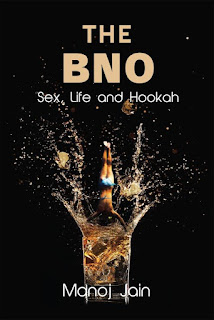 This book is a collection of 9 chapters with several main characters including Rohan, Riddhima, Venkatesh, Myra, Akram, Geetanjali, Kulbir, Suyash, Veena and Neha.

The story brings out the harsh truth of the otherwise concealed face of many in the society. Though I wouldn't say it is predominantly present,but the way, the story was written makes me feel that it had happened elsewhere. Eventually, even the author was asked the same question whether this did happen and he said a big NO.

I could also connect this story with a kollywood movie called "Panchatanthiram" which was enacted by Kamal Hassan, Ramesh Aravind, Jayaram, Suman and Yugi Sethu. However the story of this movie is completely different when compared to this story and I can also say that if this was made as a movie, it would for sure, receive "Critics Award" as there are lot to speak about this.

It all begins with a Boys Night Out and the sequence of events. These guys were known to each other but comes from a different background with each having their own priorities. The story revolves around the presence of sexual abuse, sexual pleasure, seeking pleasure in worldly things, illegal relationships coupled with marriage, responsibility, society and status.

It also talks about gay relationship and how the call girls were treated. Well, I do not want to go deep into it because the subject itself is to deep and it requires a careful reading t understand the real essence.

If you would like to explore your darker of it through this book, go for it as it would match each and every expectation of yours....

The book is available on Amazon and also on Flipkart.