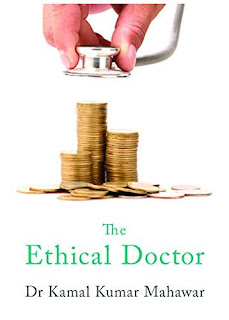 I am sure you all must be wondering a to why you need to shell out so much when it comes to medical care. This is the right book which clearly explains the reasons bringing out some of the shocking revelations and truth in a subtle manner.

You do not have to be a Physician to read and understand this book because the author has written in such a way that even a layman could realise as to what exactly is happening in the medical field.There were no usage of jargons which must be appreciated as well.

The author himself being a Doctor/Physician digs deep into various root causes that has made the medical care, beyond the reach for millions of families across the globe. The book is divided into 12 chapters and in the end, the author has given some of the ways in which this could be addressed.

The book begins with Code Of Conduct laid down by MCI(Medical Council of India)and the author points out how much difficult it is in real time to be implemented as it is. I am not going to cover all over here but a very few aspects from this book.

One of the code says "The prime object of the medical profession is to render service to humanity; reward or financial gain is a subordinate consideration"
While the first point cannot be debated, the second half should certainly be. This is because no one comes to this profession with the complete motto f serving humanity. Moreover the expenses which we would see later are on a real high note to complete medical studies.

The book also talks about the reason as to why Doctors aren't polite in most of the cases. This is because it will be seen as a weakness by patients who in turn would start asking multiple questions to which even the Doctor wouldn't be knowing the answer.

But in reality, this is not the case since here the author digs deep and exposes the so called Quacks who in fact are more in number than the real doctors. These quacks are spread across the world but in India, their existence is much more due to various socio-economic reasons.

Have you ever witnessed your doctor clearly mentioning their qualification and also the registration number? Do take a look next time when you visit them. The sad part is MCI does not maintain a database for this.

The author also emphasises the need of having unique registration number in order to pull up the doctor's details and also a system in place to check instantly whether a particular doctor is black listed which is not available at the moment.

This book also talks in great detail about creating a smartphone app for the above purpose and also to avoid quacks which I think is happening these days with the introduction of Practo, GetVisit etc.,

It also talks about Punctuality, Paid Visits to attend overseas conference which was used as a family trip by Doctors, Expensive Gifts and in kind for referring patients to laboratory, hospitals, specialist etc., One of the best way to get cheaper medication is to avoid reference because the author points out "When you are referred by someone to someone, the person to who you are referred is bound to pay commission to the one who has referred you"  In case of laboratory, go direct and say "Self Referral" and since there are no middlemen involved by then, the discounts would be passed on to you direct.

The code also specifically talks about doctors not to appear for any brand as an individual but when he/she gets attached to a Corporate Hospital,the norms are flouted and no one would question them.

The author takes a dig on Corporate Hospitals which has made this system a business rather than service and the ways and means in which they acquire patients by deploying pubic relations executive. In reality, it is difficult for any hospital to survive without giving commission which is referred as "Kickback" and it is the patient who pays for all these which goes to hospital, doctor, pharma companies and middlemen. A staggering 39 million families are pushed into poverty every year in India for mounting medical expenses.

How some of the doctors play with patient's belief was also detailed in this book. It points out unnecessary medications being prescribed to them which would have healed otherwise, naturally. I myself was a victim when I did go to a gynaecologist, she asked as to how much we could afford monthly so that she can give treatment accordingly. This was highly unethical on her part.

The books talks about how private hospitals sets target to their doctors and they are in constant pressure to bring that money in order to sustain themselves. I would also like to cite another example where as a kid when I inhaled scented rubber, it went and struck inside my nostrils. We went to our family doctor. If it wasn't him, some other doctor would have surely recommended or a small surgery but he did not do that. He used a long forcep and pulled it out instantly and he did not even charge for the service.

Most of this happen because a doctor is not paid what he should actually be. When this is the case, why would they stay in India? This is one of the major reason which sees lot of physicians going abroad to take up the profession. This is also one of the reason for recommending unwanted screening and treatment for patients.

The book talks about "Ghost Surgeons" and also how few medical centres do the so called operation which in real wasn't where they would have just opened the skin and stitched it back which I had witnessed again in my personal life when my grandfather was given similar treatment for his heart in a popular health care centre in vadapalani,chennai. The book also talks about cost of appliances and drugs and the scandals in performing operations removing body parts exploiting poor who have insurance sponsored by the government.

Some of these were shown in movies as well and take the instance of Actor turned Politician VijayaKant in his movie 'Sabari" where the hospital treats a dead man and demands more money since they said at the time of admission that spending money isn't a problem.

We should be thankful to few pharmacy brands which offers discounts of up to 30% on medicines by passing on the benefit to the patients (who the author says must not be referred as consumers) in this cut-throat competitive business.

Building a Brand is also important which would give more visibility and needs to done on a regular basis. As a regular invitee for Madras Medical College Gastroenterology events on Aug 15 and Jan 26, I would say, if a Govt hospital can do it, why not Private hospitals can?

The book takes a dig on curriculum and also on NEET test since the curriculum is outdated and NEET may not give level playing opportunity for all. The author also wants an EXIT Test to determine the efficiency of the person who was awarded an MS to check whether he/she is capable of performing the surgery in real life.

The book has lot more to talk and discuss. If I did mention all, it wouldn't be appropriate. I would suggest one must buy this book for sure because it will clear all your doubts and misconception on the medical field and doctors and help you understand the reality.

The book is available on Amazon and Flipkart