1
Uncategories The Sentimental Terrorist : A novel of Afghanistan

The Sentimental Terrorist : A novel of Afghanistan 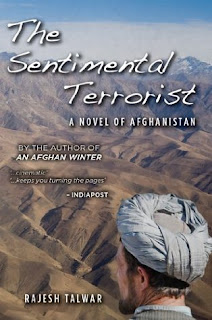 
A perfect dramatic novel which details the life of a Afghan Pashtun Sunni Muslim as to how he was forced to take up Jihad by Al-Qaida against his wish and what transpired in the end.

I felt the novel was bit lengthy but it was certainly needed to add weightage to the story. Mohsin Khan is the lead character in the story. He was GOD fearing and always believed in doing good things and was completely against killing others to attain Jannat.

He falls in love with Mumtaz who was given a perfect certificate by him when she was interviewed by his superior officer from DRAC. Once he left the country for another assignment, Pierre comes into picture. Unlike his counterpart, Pierre did not give any chance to Mohsin to be with Mumtaz and at one point in time, he uses his position and persuaded Mumtaz to accept him as her better half.

Mumtaz was a poor soul. Though she had liking towards Mohsin, she never revealed it and the fact that her mother was suffering from the beatings of her uncle made her to accept the offer from Pierre as he promised to take her also along with them, once they got married.

Once Mumtaz went away from his life, Mohsin had a different perception to life. What happened later was even more gruelling for him since he lost his only sister, nephew, nieces and uncle as their village got bombed. This was ordered by none other than K-Jim who was once a counterpart of Mohsin.

This is where Mohsin takes to Jihad. He was forced to accept it since he had no other way to redeem his revenge. There was simultaneously another story where Amala, a economic scholar from Bangladesh and James Stewart had been working on another project.

Finally, when Mohsin attacks the place where K-Jim was residing, he had some surprise on store. What was it? Was he able to take his revenge? Read this perfect war-torn nation story to find out the end.

The story shows a different perspective of what we perceive in real about the so-called terrorists may not always be true because as the saying goes " A child is born good but it is the way, the child is brought up and the circumstances that forces him/her to take the wrong path"

The book is available in Amazon.