Blood in the Paradise - A tale of an impossible murder 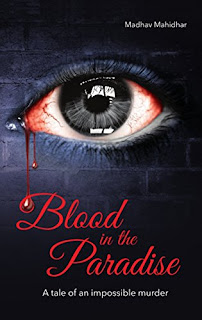 
Blood in the Paradise is a thriller novel by Madhav Mahidhar. It all begins with Madhumitha who wanted to end her life by consuming cyanide along with her twin daughters as she was not happy with her husband Vikas who became a drunkard and started developing lot of other bad habits. She even consumes poison and just before she could give that to her kids, her husband comes in and finds her in the brink of death and calls for an ambulance.

The next scene takes a dramatic turn where even Vikas has consumed poison and he dies in the hospital but Madhumitha gets saved. This triggers suspicion among the cops who begins their investigation. The team comprising Mallika, Vijay and their superior Vishwaroop analyses it correctly and brings out various facts but could not present any concrete facts to support their theory.

Anupriya, a feminist activist and socialist comes to the rescue of   Madhumitha, her close friend and she hires one of the top lawyers in the city to fight the case and eventually the judgement was given in their favour.

Was Vikas murdered in real or was it just an accident? If it was a murder, who did it and why? You might have your own notions but in reality, you would be surprised for sure as to who devised the plan. Read the book now which is available in Amazon and find out the answer.


I won a review copy from The Tales Pensieve as part of Reviewers Programme. Register on #TTP for lots of #book fun and activities.