1
Uncategories Who can use the Tollgates for FREE?

Who can use the Tollgates for FREE?

We all would have crossed at least 1 toll gate, if not many while going on road from one place to another. It may be within the State or to our Neighboring State.

As a traveler, I myself would have crossed a toll gate not less than 1000 times ( I calculated it at a bare minimum). Until today, I had gone on a 4 or a 6 Wheeler (hope you got the vehicles by now. If not, it is either a Car or a State/Private Transport Bus) and had always paid Toll Charges.

Today, I had traveled from my place to a temple which is some 55 kilometres away from my home and had a chance to pass a toll gate. Luckily, this time, I had gone with my dad on our 2 Wheeler and hence we need not have to pay any toll charges. Hope you all by now would be knowing for sure that if you are traveling on a 2 Wheeler, you need not have to pay any Toll Charges. If you aren't aware, kindly make a note.

I also had the time and pleasure to stop and click a pic just before the toll gate to find out as to whose or which vehicles were exempted from paying Toll Charges. The Pic is given below and it is self explanatory :-) 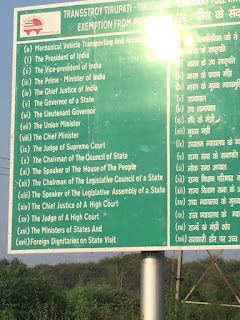 I was a bit surprised to see the below mentioned dignitaries were not covered under this:

Though their fare would be covered by the respective Governments, if they are on an official visit and most of the time, they would commute on their pilot cars( For Official Purposes only), the above mentioned wield enormous powers under The Indian Constitution especially the MP's who are placed in the Top 8 Powerful list which reads like President,Vice-President,Prime Minister,Governor,Judges of Supreme Court,Chief Minister, MP etc.,

If you always wondered, which vehicles were exempted from paying the toll charges, now you know. Do spread the word :-)