1
Welcome to Sarath Babu's Lifestyle Blog Others How do I see this Rs.500 and Rs.1000 Rupee Note ban? 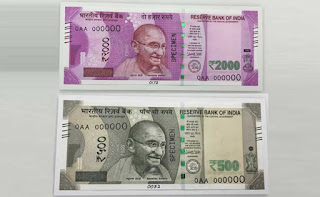 A man went and asked for Rs.400 on ATM. It dispensed Rs.1000 and flashed a message "Keep the change"

Herein, you would find the old Rs.500 and Rs.1000 notes being used to serve you with ground nuts

These were some of the jokes that were making the rounds on the internet since last night. Jokes apart, let us come to the subject. How do I see this?

Narendra Modiji has done a perfect surgical strike overnight. This act is not the first time. It was done in 1978. It was done in various other occasions too. Eradicating the higher denomination notes will lead to erosion of black money hoarders to a certain extent, though not in full.

While the effect will certainly be felt on few sections on the society since there were various aspects that has come attached to this, let us see how it will and will not impact the genuine money holders.

Firstly, the Govt has given time for 50 days for all of u to get the old notes being exchanged in our respective banks. Hence, there is no need to panic in the first place.

If you are paying more than Rs.4,000, it has to be accounted. If you are paying salary, this will not impact you because you can say it without any worries that it is your salary. Whether you have declared this on your returns is upto you.

Banks will function for extended hours till 31st December to facilitate the exchange.

Few departments and sectors like Govt controlled Petrol Bunks, Milk Booths, Hospitals, Pharmacies would continue to accept the old notes for the next 3 days that is till 11th November.

There is no restriction for online transaction like NEFT,RTGS,IMPS and also Cheque transactions.

First and foremost, this will come as a BIG BLOW to the Fake/Bogus Notes since a survey says that the circulation of fake/bogus notes Rs.500 and Rs.1000 denominations enjoys the majority due to its high face value. You would hardly find a fake note in a lower denomination. This will help us stabilise our economy to a greater extent whether this announcement brings out the Black Money to its fullest extent or not.

1. This will surely create an impact on those who have black money.

2. Govt had given lot of time for the black money holders to disclose their income voluntarily. Govt was forced to do this as it did not get proper response.

3. Money has to be foregone by black money hoarders. If it has to be turned white, it has to be paid into the bank making it accountable.

4. The new Rs.2000 notes will have NGC(Nano GPS Chip) which can help track the concentration of these notes in a particular place,if stored for over a period of time. This can be tracked even if it is buried under the ground.

5. There is no limit for you to pay the funds into your account unless you have them as an unaccounted  money ;-)

1. An overnight decision like this will have an immediate impact on commoners since small traders and travelers would have Rs.500 and Rs.1000 only in most of the situation.When they were being denied in most of the places. these people will be inconvenienced.

2. A proper education with regards to making it clear as to how these notes can be exchanged should be circulated on media and press. If this is not done effectively, this may backfire.

Critics would continue to critic whatever you do. They should understand that the announcement may have come overnight but the decision for the same would have taken few months for the PM to announce as it is not a single man decision but would have taken in consultation with eminent economists and well educated people including IAS,IRS officers.