The Resurrection Of Evil 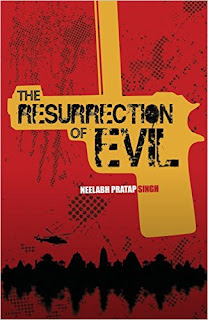 The story begins with the murder of Swati by Manoj. He hits her as she raised her voice against his mother and she dies in the spot.

In the USA, Richard Turner wanted to flee from his place to Washington D.C. but was confronted by the man whom he dreaded the most...

In Mahendargarh district of Haryana, Inspector Harish Tripathi was on an operation to nab idol smuggler Jahangir who steals a pot but ends up losing 5 of his constable. He gets eventually suspended.

Somewhere in Mumbai, in a pub, a guy was enjoying his evening. He sees few young lads misbehaving with girls. He teaches them a lesson by hitting one of the influential guy on his head. An Inspector was summoned to the scene. He wanted the guy to stop his heroism by looking at him from behind. When the guy turns, he realises that he was none other than ACP Aryan. What a way t introduce him. I felt like watching a movie in the introduction scene of Aryan.

Aryan was deputed by his boss to nab Jahangir.Aryan had a troubled childhood since his dad worked for a underworld don and he gets killed by the rival gang. He fell in love with Natasha and marries her. There were few misunderstandings between them which makes Natasha to leave Aryan.

Jahangir gets killed by Lugh who hired him initially. Aryan finds it and narrows his search on Jahangir. Did Aryan nab Lugh?

Were there any other faction in this interesting thriller?

If yes, what were they up to and why a simple pot was given so much prominence?

What is Tuatha De Danann - a magical race of supernaturally gifted people from Ireland got to do with Samudhra Mandhan which is found in Hindu Mythology?

Read this fast paced thriller novel to find out more. I was really surprised when I came to know that this is the first book by the author which never looked like one. When I had a word with him, he also said that it took 3 years for him to pen down this story and I can clearly see it in the book as there was lot of research which had gone into this novel.

If you love myths, technology, science fiction coupled with thriller, this book is certainly for you. Do give a read and share it among your family and friends. The author certainly deserves a pat on his back :-)