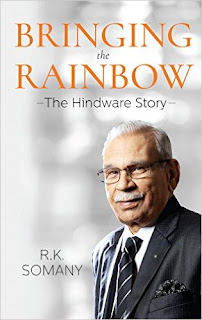 Bringing the Rainbow is not just an autobiography. It is the legacy that was build over a period spanning more than five decades by the leader in sanitary-ware products in Mr. R. K. Somany.

When I read the book, I could clearly understand that business runs in their blood. Having the Marwari background, this is no surprise. Mr Somany begins the book with how his grandfather Mr. Ram Prasad starts off from Chiwara despite having thriving money lending business to make it even bigger. Little did he knew by then that he would be setting a business empire.

Born as 9th kid among 11 on 10th November, 1937 Mr Somany lost his father when he was just 7. His elder brother Mr. Hiralall and his wife Kamla Bhabi became his foster parents. He fondly recollects an incident which happened in school which made him not to compromise what he thought was right. This came in handy later when he took the helm of managing HSIL (Hindustan Sanitaryware India Limited). He also became the first in the Somany clan to graduate.

He is nearing 80 and even now he puts in 16-18 hours of work which is incredible. He is very much strict about punctuality and time management apart from being specific on compliance. He started his venture with R B Rhodda where he learnt how to deal with various arms and levels of the Government which came in handy later. His driving license, which got cancelled as he was only 14 and his recollection of license no are amazing. This taught him "Never breach the law". He also believed that "To be successful, one has to be in the thick of the action".

When the HSIL was proposed to be setup, he recollects the testing time where he had to

* Deal with land owners who were expecting a huge compensation and how the help of then Chief Minister of , Mr Partap Singh Kairon made a difference.
* Troubles he faced with getting import license for the machinery to be procured to be processed in .
* Public Issue clearance from Controller of Capital Issues.
* Plan Approval from Directorate General of Technical Development.

To look after the business, he had to shift to leaving his joint family and to live in a nuclear family set-up.

In order to be on par with the ever changing world, he even bought a Technical Directory to understand technical terms which shows his ever willingness to learn.

Mr Somany is a visionary because when he witnessed that the sanitaryware sold in were made of earthenware and he decided to introduce Vitreous Chinese which was superior in quality with greater durability. I can attribute this quality to Shiv Khera's famous quote "Winners don't do different things. They do things differently"

With limited production capacity of 60 units a day, the company grew to produce 600-1000 units a day thereby leading to reduction in rate which saw the rates being slashed to almost 57%.

Mr Somany never believed in black-marketing and imposed a rule that none of his company products would be sold more than MRP. As he learnt the trade, he was involved in day to day operations. Once when a kiln got repaired, he entered it in spite of temperature inside it being 120 degrees Celsius and he later said that he did not want to enforce others when they were not willing to commit.

The selection of dealership was again something he took great care of. This was never given to all who has applied but were done after going through rigorous selection process. He went to the market himself to understand the supply chain. He recollects his very first office being set up in the plant itself with asbestos roof with no fan and air-conditioner. As they say "Success never comes easy but comes with sweat and hard work", the group now owns 8 factories in and 1 in

He is also real proud of the fact that the company never missed paying dividend and in fact missed only once in its 55 years of history and commanding close to 40% share in the Indian Market was not achieved overnight. He has read the mindset of consumers from time to time and this is what made him to introduce Queo which is based out of U.K and has signed Jacqueline Fernandes as its Brand Ambassador. On the other hand, HSIL has roped in Shah Rukh Khan as its Brand Ambassador. The group also launched its own water purifier brand, Moonbow, recently.

He has also invested so much in Research and development which made HSIL's R&D, only one in the sanitary ware industry recognized by the Department of Science and Technology. What makes Mr. R. K. Somany a humble person is he admits the fact openly that "I do not have information for all" and quoting Jack Welch here "Secret of his success lay in strategy of surrounding himself with people much smarter than himself".

What makes any one taken by great surprise is that he never accepts any recommendation for any post in his companies. An important insight that he has shared is a noteworthy point to be noted - "Top management does not have any time out; It's a full time assignment where only the most committed succeed".

Rajendra Kumar Somany, Chairman & Managing Director of India’s largest sanitaryware manufacturing company HSIL Limited (formerly Hindustan Sanitaryware & Industries Ltd) with multi-sectoral presence is a person who was a born leader with combination of vision and positive energy that has made difference in the millions of lives.

The spirit of entrepreneurship was ingrained very early in his life which, culminated with the commencement of HSIL’s first ceramic plant in Bahadurgarh in 1963. He was instrumental in bringing vitreous china technology to thus ushering in a new chapter in the sanitaryware industry.

His ceaseless innovation for sustainable market dominance over the years reflects in HSIL continuing to be a leading player in the market. A respected personality in the field of sanitaryware, he was conferred the ‘Lifetime Achievement’ awards, from, Washroom & beyond, a reputed publication and India Plumbing Association (IPA), in recognition of his influence on society & industry. In 2013, the World Confederation of Business honored him with the ‘World Leader Businessperson’ recognition.

Apart from building HSIL Limited, Mr. R K Somany was instrumental in assisting the Indian Standards Institution (ISI), now known as Bureau of Indian Standards (BIS), to develop quality standards for the sanitaryware industry. He is also associated with Rotary Club, FICCI, PHDCCI and The Jaycees.

He has also held several respected positions with esteemed organisations;

President of The Associated Chambers of Commerce (ASSOCHAM);
President of PHD Chamber of Commerce & Industry, to name a few.
At present, he is the Executive Committee Member of Green Building Council & Chairman of Plumbing Skill Council (IPSC).

The life of Mr R.K.Somany was not a smooth one, a path that was filled with roses but with thorns and stones which he has crossed successfully without compromising on quality and standards of his vision which still reflects in his products. An innovative person he is, he stood well beyond the time by then and even till date.

The book is not just another autobiography but culmination of his hard earned experience coupled with never give up attitude which would in many ways help the present generation as a guideline as to what one needs to perceive in order to achieve greater heights.

The book, Bringing The Rainbow – The Hindware Story is published by Rupa Publications and can be ordered either from Amazon or Flipkart.