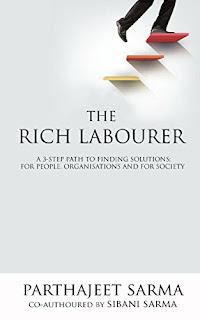 Have you ever wondered whether you could teach management through a present day story? I have not read one until recently and never thought that it would be possible until I stumbled upon The Rich Labourer.

The book revolves around few characters like Ravi,Riya, Vinod, Jagdish,Nikita, Seema,Rohit,Ramesh, Saee and had beautifully placed forth in front of us as to how  project idea can be conceived and implemented. The team decides to venture into a project of creating a self-sustained housing model which they code name it as "Powerhouse"

Whether they managed to successfully built one is the story.

What has to be done during these stages has been well explained via a story involving the characters mentioned above. The authors had mentioned that this is the first version of the book and have invited suggestions too but I honestly feel, if we go with the concept as such, the book is perfectly worded and would not require any further additions unless a new concept needs to be imbibed into it.

The concept mentioned in the book can be applied in real life in most of the aspects. When there was a mention of how the cost can be saved in BPO, I could easily connect myself with the scenario as I had worked myself in a BPO for close to 8 years and had seen in person as to how changing the cubicle structure, flooring, colour scheme and replacing old monitors with swanky new ones had a drastic effect in the performance of the employees. I am sure, as a reader, you too would surely be able to make the connect with your life scenarios too.