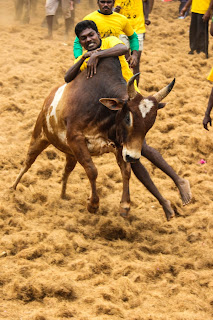 Jallikattu as it is popularly called is a traditional sport of Tamilnadu. This has been in practice or few hundreds of years. The actual name of the sport is "Sallikattu" where Salli or Sallikaasu were the pennies and Kattu is a bag or pouch. The bag which contains these pennies were tied on the horns of the bull and the person who stops the raging bull can claim this bag as a reward.

The game has been followed in the nearby States in different names. Even in Tamilnadu it is played in another name called "Manju Virattu". The references to this sport has found a mention in ancient Tamil Epics.

Jallikattu is not the sport that inflict or has the intention to inflict wound either to the Bull or the Human Beings who are involved in the sport. Even until recently, it became a nation wide issue when protesters staged their demands across entire Tamilnadu and most prominently from Marina Beach,Chennai - I was not aware of why this sport was given so much importance.

Alanganallur is the place which is renowned worldwide for this sport and travellers even from overseas use to frequent to witness the sheer grit and determination showed by the youngsters who tried to exhibit their skills in stopping the bulls. These bulls will start running from a specially designed place called "Vaadivaasal" and it will run up to a certain distance within which it needs to be stopped.

Owing to the popularity, sallikaasu bags were removed from the horns of the bulls. Instead, sponsors and those who raised the bulls started announcing various prizes for those who successfully stopped their bulls which range from bicycle, cupboards, cots and at times even cash prize.

What makes this sport special?

There are few things which makes this sport special. Unlike in Spain, where the bull is tamed, here the bull is respected equivalent to GOD. There are strict rules and procedures being followed to ensure no bull is harmed. Even the slightest harm inflicted on bull is seen with great fear as the people believe that it unleash the wrath of God's over their village. So there is no question of harming the bull.

Secondly, the bulls were well fed and unlike unverified reports that these bulls will be given liquor in order to increase their anger and rage, even the participants were ensured that they were not under the influence of alcohol at the time of entering the arena.

There are also rules that the bull has to be stopped within 30 metres or 3 jumps or 3 attempts by a single person and that he can stop it only by holding its humps/horns and not any other part of the bull. Unverified reports claims that these bulls will be stopped by holding their tail which is incorrect.

Prior permission from various authorities of the district must be obtained who would ensure that the safety parameters of all the aspects were met.So there is no question of violation on safety parameters whatsoever.

These bulls which remain undefeated or unstopped were given great respect in the village and those who raised it would also be accorded the same respect.

The sport has witnessed few loss of lives especially human lives from time to time owing to various reasons but as mentioned by few eminent, a sport cannot be banned just because it is dangerous and if that is the case, almost all the sports being played in the world needs to be banned as we have witnessed deaths in all sports irrespective of place, culture which I need not have to mention it here as I am sure that as a reader, you yourself is aware of the same :-)