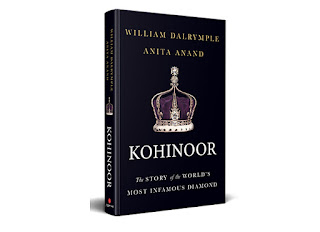 Crossword Bookstore presents an opportunity to meet bestselling writer and historian William Dalrymple and Anita Anand, co-authors of  Kohinoor: The Story of the World’s Most Infamous Diamond.

​​
Kohinoor: The Story of the World’s Most Infamous Diamond unearths fascinating new information and is a gripping historical saga of loot, murder, torture, deceit and colonial greed. Using previously untranslated Sanskrit, Persian and Urdu sources, and the discoveries of modern gemologists, William Dalrymple and Anita Anand blow away the legends to reveal the Kohinoor’s true history – stranger, and more violent, than any fiction.

The story sweeps from the century the Kohinoor spent embedded in the Mughals’ fabulous Peacock Throne to the months it spent hidden in a prison cell in a remote Afghan fort; from the years it languished unrecognized on a mullah’s desk, used as a paperweight, through to the torture chamber where a Persian prince was crowned in molten lead in an attempt to extract the truth about the gem’s hiding place. Once worn on Ranjit Singh’s turban, Duleep Singh’s armband and Queen Victoria’s crown, it is now locked in the Tower of London, where it continues to arouse passions as India, Pakistan, Afghanistan and Iran all demand its return.

​​
William Dalrymple is an acclaimed historian and bestselling author whose books include City of Djinns, White Mughals, The Last Mughal, Nine Lives and Return of a King. His many awards include the Thomas Cook Travel Book Award, the Wolfson Prize for History, the Duff Cooper Memorial Prize, the Hemingway Prize, the Kapuscinski Prize, the Asia House Award for Asian Literature and the Vodafone/Crossword Award for non-fiction.

​​
Anita Anand has been a radio and television journalist in Britain for over twenty years, presenting major programmes on BBC. Her first book, Sophia: Princess, Suffragette, Revolutionary, is a highly-acclaimed biography of the daughter of Maharaja Duleep Singh, last ruler of Punjab, who was forced to hand over the Koh-i-Noor to the British after they annexed his kingdom in 1849.