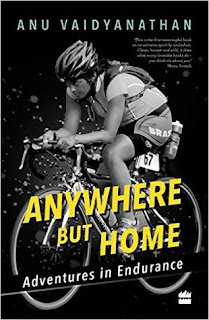 An Extraordinary Memoir which I have read in the recent days. When I say this, I am 100% sure that anyone who reads this book would agree with me without a second thought. It is my privilege to review this amazing book and I am grateful to have received the autographed book from the author herself.

Before starting my review, I must openly confess that I have not heard about the author and I would say it wouldn't come as a surprise being in India where we give more importance and priority to Cricket over others. Off late, thanks to some stellar performance from other performers that sports like Tennis, Badminton, Kabbadi and Chess(these two have always been neglected despite producing World Champions for some time now) have been catching up interest among the youngsters.

Having said that, I must also say that I am proud to be followed by Ironman of India - Milind Soman who also happens to be a good friend of my sister like friend as she is associate with him for Pinkathon.

For those who do not know who the author of this amazing book "Anywhere But Home" is Anu Vaidyanathan who despite being a Doctorate(she has completed it in record time(Department and University) of just 26 months from UC Canterbury in Electrical Engineering)has not used it on the title which shows the modest character of the author. I do not want to go deep into this to avoid conflicts. She is the founder of PatNMarks, an intellectual property consulting firm. Anu Vaidyanathan is the first Asian Woman to complete the Ultraman Canada:a punishing 10km swim, 2 20-km bike ride and an 84.4km run and she was placed Sixth, which is mind blowing.

Having run few half marathons and 10 km run both in Bangalore and Chennai, I know how tiring and challenging it is to compete in Triathlon let alone complete it. Now let us see the review:

Anu(I would use this name to avoid mentioning her full name which is bit lengthy) did enrol it initially for a PhD and had to discontinue it due to various circumstances which is not limited to Pay Issues despite more qualification and more hours of work put compared to her male peers. The circumstances in which the decision to compete in Ironman was extraordinary.

Being a woman, she has always been looked as a mere machine - to get married or to get treated less in this male dominate world. She has described the life incidents beautifully which comprised places like Bengaluru and Chennai. The mention of Kanteerva Stadium, Ulsoor had made me go back to my Bengaluru Days as I was staying there for my work from 2004-2011. The mention of R.V.College of Engineering made me get goosebumps since my better half worked there for an year after my marriage before shifting back to Chennai altogether. Her wit has been evident in many places and in one of the events she was outnumbered by her own mother since Anu could secure only the 7th place whereas her Mom secured 1st in her category. Her mom being the second Woman Patent Agent in India is needs to be mentioned here.

The mix up of Golconda for Gongura is a funny one. I can understand these mix-ups happen when you have trouble with other language. Anu was treated not so good in America initially. She got her first proposal when she was 21 and not even ready to think about relationships.

It was also sad to read how some of the great ambitions has to be built on unfortunate events like uttering a lie to a bike guide that she had a boy friend which was not the case by then.

Anu has travelled across Countries and Continents. In 2007, she took part in 2nd Ironman contest in Brazil. Her persistence and perseverance to compete was getting up as early as 3:30AM. Her decision to move to New Zealand has opened up new avenues. Firstly she could not only enrol herself for PhD but could realise her dreams few months later.

Finding scholarship was really a tough one for this not so encouraged sport in India and most of the time, Anu has ended up spending her own money. Her encounter with Magpie in New Zealand was real interesting. Just like the author, even I have come across the magpie incident for the first time. Her hard work did make her to qualify for 70.3 World Championship, Florida but she had to let that opportunity skip.

The experience in various places with regards to physical landscape, weather conditions were explained in minute detail making me live there myself which is the best part of the book. I also did not knew till date that Ultraman needs a mandatory crew member for every athlete.

I felt really satisfied of having read this book which I would say will be a motivating factor for many aspiring athletes, the field in which we are far behind when compared to other nations in the World. It would be very apt to say that Anu Vaidyanathan has Championed the Ultraman and I am sure this book will lead the way to many youngsters who would take her as an inspiration and prove their mettle in the coming days.

The book is available in Amazon.