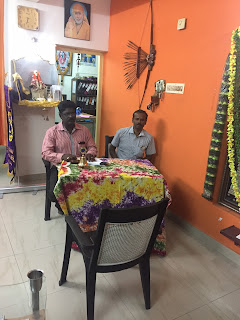 Since President Ln Baskar was away in the USA, the meeting was presided by Secretary Ln Dr T Sekar and Treasurer Ln Thiagarajan.

The meeting lasted for 30 minutes.

Points that were discussed in the meeting were:

1) To pay the International Dues before the due date.

2) In order to execute point No.1, steps should be taken to collect subscription and dues from few members who either has to pay the full amount or half the amount as the case may be.

3) To address the issue of having added the spouse of the members under "Full Membership" category which was duly followed up by Ln Jayaraman sir on Monday - 13th Feb 2017 and got the information from Ln B N Venkat from the Central Office that the issue has already been taken up by the President with the International and rather than waiting for them to reply, pay the dues immediately and later avail them as Credit. Once this issue is resolved, we are expectving to get a considerable amount as Credit.

4) If there is an excess, those who have paid for Charter Presentation Night would be refunded.

5) Zone Social was discussed. Ln Dr Sekar has informed that we would pool in Rs.3,000 for the Social from those who are attending the event and has also mentioned that the venue has been shifted to a place in OMR.

Invites to attend the meeting were sent to all the members either through phone call / SMS/ WhatsApp Message and apart from the Secretary and the Treasurer, others who attended the meeting were Ln Jayaraman, Ln Vijayalakshmi, Ln Ashokan, Ln Senthil Raj Babu and Ln Sarath Babu.