The Tree With a Thousand Apples 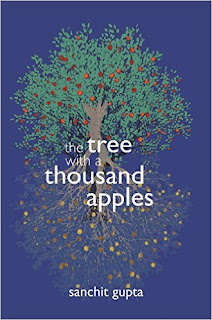 I was feeling that the book was not interesting at least in the very first chapter but trust me after completing that and once I started reading from chapter 2, I could not stop it till the end as it unfolded the life and miseries of Kashmir Muslims. Just because they were born there and as a Muslim, the endless tortures they had to go through has been very beautifully captured in this book and it in fact reveals the reality which is otherwise not shown or being made public either in the media or otherwise.

Deewan, a Kashmiri Pundit has to flee the place after one fateful night where his neighbouring Muslim family which gave them refuge gets killed. Only few survives the massacre and in the mean while Deewan's family get to hear that their elder son Ravi getting killed in a terrorist attack.

Just before the incident, Ravi has introduced Deewan to his boss Major Chaudhary who he held in high esteem.

During one the interrogation, Bilal and Safeena goes missing. As they say, events makes a man bad or good and not his birth, Bilal turns out to become a terrorist but he has to pay heavy price for it. Why did he become one and what did he achieve in the end is a different story altogether.

The story effectively captures the love and affection of Bilal and his sacrifices. The meeting of Safeena by Deewan who was long gone and later to turn up as a renowned Poet and Journalist was an unexpected one. Where did he meet and who was responsible for her fate is another story.

Did Safeena gets rescued from the place where she was held captive?
If yes, who helped her to escape?
Were there any more sacrifices?
Did the three friends unite in the end?

Find out by buying the book.

The story has lots of twists and turns which makes it a compelling read. This could probably be made into a bollywood movie as the movie plot would perfectly fit for it.

The book is available on Amazon and all leading book stores.