1
Welcome to Sarath Babu's Lifestyle Blog Book Reviews Events and Movies Love, Loss and What We Ate : A Memoir - Book Launch and Review

Love, Loss and What We Ate : A Memoir - Book Launch and Review

When I saw the contest on the Social Medial Channels of Taj Coromandel regarding the book reading event of famed model and author Padma Lakshmi, I jumped into it immediately and participated on all the channels including Facebook, Twitter and Instagram. There were only 2 simple questions. I answered both of them and was waiting for the results.

I was about to enter a movie hall when I got the call from Novena from Taj Communications team informing that I am one of the winners. My joy knew no bound. 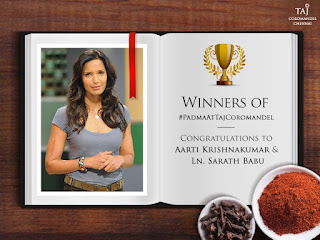 I was waiting for the big day. The day came. It was February 14,2017. I was there by 5:30 PM and had an opportunity to meet up with US Embassy staff - Mr Biju (who I had met exactly 6 years ago in another event) who recognised me and spoke to me for good few minutes. In the mean time, I had an opportunity to meet Dr Subodh who is a psychologist and when we were conversing, Mr. Matthew another US Embassy Staff came and joined our conversation which lasted for good 20 minutes.

After the welcome drink, the event commenced in The Ball Room of Taj Coromandel, Chennai. 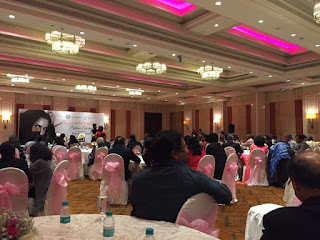 As you could see from the above pic, The Ball Room was filled up with guests which had Who's Who from Chennai including Mr.N Ram from The Hindu,Legendary actor Nasser, Percussionist Anil Srinivasan, Singer Devan, Actor Swarnamalya among others.

After the welcome speech from the Acting Consul General of US Embassy,Chennai and Novena from Taj Communications team, the book reading program had begun. 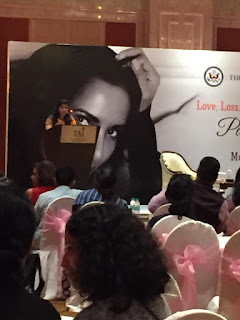 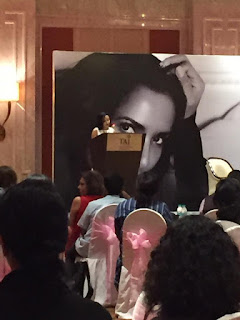 Mr Mukund Padmanabhan from The Hindu - BusinessLine agazine had the conversation with the author. The book reading lasted for close to 25 minutes in total. Below are some of the excerpts from the book reading session. I have made it as short video clips for you to view it as and when you wanted it, with ease.

After the book reading session, it was time for autographs and posing with the author. 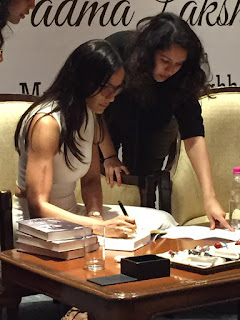 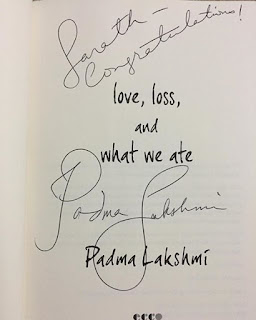 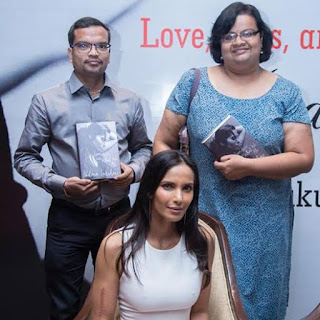 The event got concluded at 8PM.

My heartfelt thanks to Taj Coromandel,Chennai for giving me the experience of a lifetime. 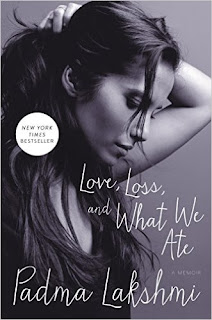 Is this a cook book? Is this a Memoir? I would say it is the combination of both. Author did say during the book session that this isn't her complete memoir since she has got more to come in her life, in the future. Please note that neither the author nor I promote or support Smoking or Drinking Liquor.

When you see a real successful person, you might think they were living the life king size. While it is true to some extent, we may not know the struggles they had actually gone through to reach that point. This book is a classic example of how Padma Lakshmi who was born in a middle calss family reached her pinnacle.

The book is divided into 17 chapters. I may or may not talk about all of them and even if I did, it will just be the gist and not an exhaustive one.

Chapter 2 - Publishing her first cook book and how-to show. Domenica In - which was her first live show in Italy. Sharpe's Challenge - a mini series in British Television.

It was during this time when she was featured in the cover pic of News Week and when she had revealed this to Mr.Salman, she got a negative response.

The chapter also talked about health issues faced by her which proved beyond the doubt that when it comes to issues like these, even celebrity women are not spared by men who wanted to stamp their authority which is not an encouraging one or a good sign.

Padma Lakshmi suffered from Endometriosis which is one of the 3 major causes for infertility in Women and 10% of Women population across the World suffers from this. It was Dr.Seckin who diagnosed it firstly for her.

Padma Lakshmi started hosting Top Chef, released her Second Cook Book and also addressed in UNIFEM and was about to start the Third Season of Top Chef. The fights between her and Mr.Salman during their anniversaries proves beyond the point that even celebrities are humans and do get angry and fight over issues.

Chapter 3 - Talks about her birth in India and life associated with it. The first recipe was mentioned here.

Chapter 4 - Life as a kid and how she played in the mud road with bare foot. She used to be get dressed up like a boy which reminded my own life where it was exactly the opposite. I was the only boy child for more than a decade and all my girl cousins use to dress me up like a girl and enjoy seeing it.

You could also find the mention of Godrej, Sambhar, Thayyir Sadham(curd rice), Yoghurt making process and Pickles. I liked this line in particular "You weren't allowed to cook until you mastered the basics of preparing the vegetables and dry roasting and grinding the spices".

Chapter 5 - How the author use to have "Cranberry Drano" in the set to cleanse her digestive system. Padma Lakshmi now talks about her schooling in the USA. She had moved to Arcadia in California and was bullied by kids in the school for being tall and tanned. She felt foreign.

Chapter 6 - She talks about her life in Spain and how she got confused with Prada instead of Prado initially. She was selected as a Fitting Model who are more or less a living Mannequin for Elle,Spain.

The incident which made her get the scar on her right arm was also given in detail. It is when she was in Italy, she had met her first boy friend Daniele who made her understand the difference between the coat and a jacket.

Some of the important characters who played vital role in Padma Lakshmi's life includes but not limited to Peter, Trudy, Joseffe, Nina Blanchard, Liugi and Antonio Gozzola.

Chapter 7 - Life in Milan, Paris. Watching movies the whole Sunday with Daniele. It was during this time Mr. Newton wanted to work with her on Private Commission. She has also learnt how to walk from legendary modelling agent Piero Piazzi.

Chapter 8 to 17 - Though I can give all in more detail, I do not want to be a spoiler for this amazing book.  How she meets Teddy Frostmann who was the founder of IMG and her link up with Adam Dell and how she mothered Krishna Thea who later on became Krishna Thea Lakshmi and finally Krishna Thea Lakshmi-Dell and the loss of Teddy and the launch of her Padma Collection, quitting Smoking and Drinking, Anna Prasanam to Krishna Thea and eating her own Placenta were given in detail making this book a one of its kind which would not only serve as an inspiration for many struggling models but also as a book which supports womanhood in general which includes many roles - Daughter, Mother, Sister, Student, Girl Friend, Wife, Model, Author among many other roles she dons in her life.

The book is available on Amazon and in all leading book stores.