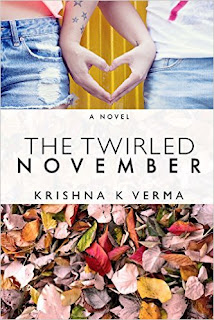 A nice story with good narration. Though it is a routine story, the way, it was narrated by the author was real good. Krish, the Protagonist falls in love with Avantika aka Avani.Avani reciprocates it.  He also meets up another girl while travelling else where in a bus and names her 2G(Giggle Girl).

Even the parents of Krish and Avani had no qualms in agreeing to the proposal. Just then when everything was seeming to go right, the 2G appears and she was none other than Avani's cousin Kanak. Krish's mind gets distracted. Harry and Smriti tried their best to help Krish come out of infatuation. Did Krish realise his mistake? Did they both - Krish and Avantika unite together in the end is the story.

My honest review is though I liked the story, I was totally disappointed with editorial work. There were lot of errors be it with regards to sentence, words or grammar which is the complete spoiler of otherwise a good story. I wish the next edition takes care of all these errors which can ensure the success of this book and future releases by the author. My rating on sties were the mere implication of this major disaster and not for the story.