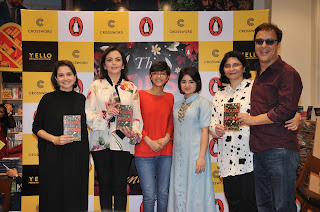 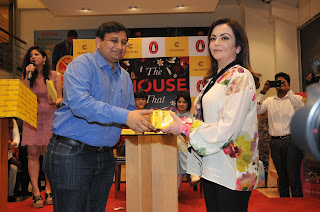 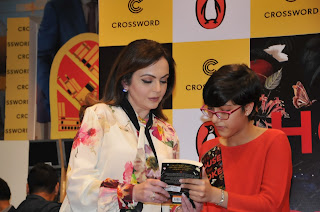 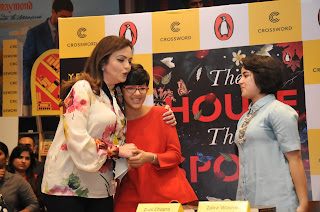 Crossword Bookstores had some special guests in attendance on 8th February.

Zuni Chopra, daughter of noted film critic Anupama Chopra and filmmaker Vidhu Vinod Chopra, launched her Debut Novel
​​
The House That Spoke, today. The book was released by Mrs Nita M. Ambani at Crossword, Kemps Corner.  In conversation with Zuni Chopra was the very young and talented Zaira Wasim who played the role of young Geeta Phogat in the recently released movie Dangal.

​​
The House that Spoke, published by Penguin Random House, India,  is a kaleidoscopic tale that reimagines Kashmir with the colors of magic .

It is an intriguing mix of the fantastic and the real set in Kashmir. Zuni has dedicated this book to Kashmir, and has done so by sharing her Kashmir adventure in the form of a fantasy novel. A fan of Lewis Caroll, Zuni is among the writers who believe in sharing their imaginative fantasy world through words of wisdom.

In her delightful introduction to the book, Zuni reiterates that her story had originally been set in London because the house that inspired the story was in London. However, she decided to give her narration more innate dimension and purpose. So, she moved the novel’s setting to Kashmir instead, a place where her father grew up and she has been visiting since childhood.

The author explained that through the novel, she wants to show the readers that Kashmir is more than just the turmoil and there is more magic to it.

Speaking on the occasion
​​
​​
Mrs Nita M.Ambani shared, " This evening fills me with nostalgia that brings the memories of Zuni 's childhood. I still remember the shy ten year old Zuni unveiling her first book - The Land of Dreams.  Zuni is  a true wordsmith who has won hearts of many people by her innate ability to express her imagination through words.

Actor  Zaira Wasim added , "Zuni you are a true inspiration and a true talent that needs complete admiration".​

Welcoming the guests to Crossword Bookstores, were CEO Kinjal Shah and his team.

​About Author
Zuni is a fifteen-year-old author and has published two books of poetry. She is the daughter of noted film critic Anupama Chopra and filmmaker Vidhu Vinod Chopra. She comes from a true-blue literary lineage- the acclaimed writer Vikram Chandra is her maternal uncle. Zuni delved into the world of writing at the age of 10 and has carved a niche for herself just like parents.
​​

About Crossword BookstoreCrossword aims to be a point of cultural and social interaction where authors and poets hold court, where children are regaled, where people gravitate to be informed, to be entertained, even enlightened. The name embodies the vision of Crossword as a place and space for people who seek information, knowledge or just the pleasure of reading. Crossword stocks the widest range of books and non-books merchandise. Crossword, with 94 stores (50 0wn stores and 44 Franchised stores) across.
​
​​
About Penguin Random House India

Penguin Random House India is the subcontinent’s largest English language trade publisher. The company publishes over 250 new titles every year and has an active backlist of 3000 titles. With a strong fiction and nonfiction list, we publish across every segment including biography, travel, business, politics, history, religion and philosophy, lifestyle, cookery, health and fitness, sports and leisure, visual books and children’s books. The children’s titles are published under the Puffin and Ladybird imprints. We also co-publish Disney India’s iconic Mickey and Friends characters and five classic characters – Aladdin, Peter Pan, Pinocchio, Dumbo and the cast of The Jungle Book - under the Puffin imprint in India.

If you are considering starting a small business and have your body and mind set on opening a store or a local store on Main Street, USA you probably are fulfilling a mission and a desire to manufacture a livelihood for you and your family, but select a non-traditional business which may provide exactly the same financial prospects without each of the risks. About Dhirubhai Ambani