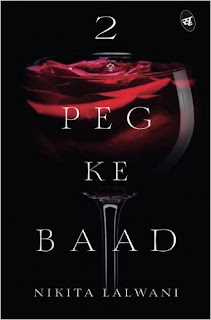 This is a collection of 14 short stories. I must say each and every story is unique in its one aspect. Author has meticulously penned down beautiful stories without moving away from the main aspect - PEGS. You read it right. Neither I or the Author support the alcohol consumption but this so called alcohol plays a major role in all these 14 different stories.

While I liked the description of "Sweet yet the most meaningless kiss" from the first story - "A walk with the call girl", I liked the portrayal of he character Ananya as to how she missed being in the wrong job and ends up her life making herself as the painting in "My Last Painting"

To Give, To Love and To Live is the theme for "What happens in Banaras, stays for a lifetime" which would give an altogether different perception of life. Parth Patel and Bandita Arora in "How we got married" is about a runaway bridegroom for a difference which made it an interesting read.

"Apology! Sex Pays" was a story to ponder as the protagonist ends up with a shemale in Thailand. "Papier Blanc" is a real touching story of Kiara and her failed love which moved me deeply.

"When all that mattered was a gun" is a different concept yet again. "Drive-in-sanity" is a story which talks about how the protagonist thought everything had happened in real but found all of them being an illusion as she was under the influence of alcohol.

"Kicking the Butt" is an excellent story which talks about the most prevailing social issue in the economy which takes a sideline as no one dares to talk about it - Child Abuse and "Rosita in the bar" reminded me of the dog which came to the same spot expecting her deceased owner for close to a decade expecting to see the person in real.

"It's not a love story" brings a different dimension of how protagonist becomes friend with a constable which eventually leads to something good in the end and "Epilogue" is something I liked it too.

"Euphobia" is a funny horror story I liked the most and last but not the least "Car No.88" which is the only non-fiction story among the lot as this story was inspired from a true event/incident.

On a whole, these stories were a perfect read on any given day and I liked every one of them for the variance that was showed and the message that the author conveyed.