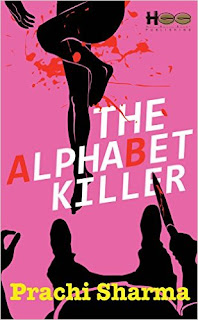 The Alphabet Killer is a very good attempt by the author. The story is a crime thriller. I was on to the book with great expectation and the book had lived up to it. I must say honestly that I was expecting some turn around in the end when the suspense was revealed because if you pay proper attention to the story, you might end up getting the answer well before the story got concluded.

Mia Santos, the protagonist heads The Feminist. She had a break up with her boy friend who owned the company. One fine day, Mia gets a threatening call asking her to confess about her past. When she turns deaf ear, she starts losing her colleagues one by one by way of brutal murders.

Mia seeks the help of her friend Jolene who knew about her past and in the meanwhile Damien De Silva, CID Senior Inspector comes into the picture to investigate the case. At one point, some vital clues were found.

Did it lead to the capture of the murderer? If yes, who was the murderer and what was so secret about Mia's past? Read the book to find out more.