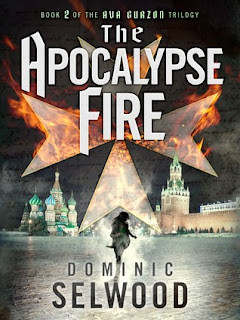 The book is a real bulky one. The story spans around 363 pages with 73 chapters but having said that I have no complaints or qualms about the volume. I infact felt sad when I finished reading it as I wanted this story to get dragged forever. I have something to pacify me though - Yes. The story is not complete yet :-)

I missed reading the first part but I got to know that I need not have to worry about it as the Book 2 had its own story which would however be concluded in Book 3.

Oleg A Durov, an oil oligarch believed that The Holy Mother had chosen him? Why?

Giovanni Raspallo was a Turin Cathedral caretaker and he gets brutally murdered and the Shroud which the cathedral had goes missing. It is this event which brings our protagonist AVA Curzon into the picture. Having served MI16 earlier, AVA resigns from the job and was happily employed in the archaeological department. Jack Swinton from MI13 persuades her to join them allowing her to continue with her present job too.

In France, Amine was chased by some unknown assailants who not only gets the catacombs from him but also murders him.

AVA and the SAS team intercepts Mercedes which was driven by the killer of Giovanni near Nuremberg. AVA is now joined by Mary. Mary gets injured in the operation and the killer - Lunev escapes the scene.

AVA gets serious and starts investigating. She along with Mary and Ferguson stumbles upon few evidences and was extremely shocked when she came to know about the involvement of Russian Intel Unit - GRU.

AVA on the other hand ventures into Durov's residence and stumbles upon something which she never thought existed. Lunev spots her but AVA manages to escape.

Now AVA gets introduced to Sir Mark Jenningswho discusses about SKOPTSY belief of Durov. What was it? With few incidents, AVA now starts suspecting her superior Swinton. She disguises herself as Sophie and meets Jose Ramos - Director of Bucephalus Gallery requesting him to set up contacts with Iraq and Syria for the artefacts business.

An attempt on her life takes place right outside her house which claims the life of her neighbour Julia. AVA gets a tablet from Israel which came from URI who wanted her to stay away from Durov. Is the Security of State of Israel involved in some conspiracy?

AVA sets off to Paris to meet Prof Hamidou to learn about Aramaic inscriptions which she stumbled upon and gets attacked in the tube station. Luckily she escapes and the assassin gets killed.AVA and Ferguson were shocked to find the Professor missing but stumbles upon an ancient letter. They again get chased by some unidentified men. Who was tracking them so perfectly?

AVA now gets a call from Mary who asks her to come to Rome immediately. On her arrival, she was told that Durov was there as the guest of Prince & Grand Master of Malta.She trespasses the property and gets caught. She stumbles upon some artefacts inside the Palace.

AVA now travels to Jersualem and gets attacked by Durov. URI saves her and warns her not to muddle with Durov any further. AVA gets back to London and tries to decipher the clues she had with her though she lost hope since Durov had Vellum apart from the Shroud.

She decides to confront Swinton but realises he always tried to save her and it was Sir Jennings who worked for Durov. In the dual both Swinton and Jennings gets killed and AVA gets saved by the Prince & Grand Master of Malta.

AVA finds out about the Apocalypse Durov had planned.

Now, if you think I have revealed the entire story - STOP. Even though I gave information from almost 300 pages, the best part of the story only starts from here and I would not make this blog review a spoiler by revealing them because the real suspense and the interesting part of the story starts from here which would surely make it a nail biting finish. Buy the book and find out what exactly happened in the end - Whether AVA was successful in stopping The Apocalypse?