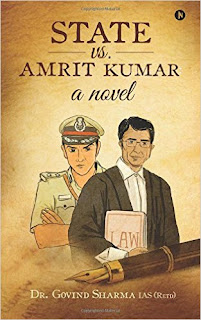 A classic book on how honest officers gets framed despite their sincere attempt to clean up the system by eliminating the criminals. Dr Sharma has used all his experience having served the Indian Govt as a Civil Servant which is clearly evident in this book.

The story begins with Madhu approaching Advocate Sukumar who has an impressive record of more than 95% success rate in his appearance to save his son Police Officer Amrit who has been fabricated in a case with false evidence. Adv Sukumar charged Rs,25 Lakhs per appearance which was too expensive for Madhu to bear but found the backing of an NGO based in Switzerland.

A thorough investigation by Adv Sukumar reveals the background of Madhu who got married to Upendra despite defeating him in the college election. They gave birth to Amrit and when he was just 2 years old, Upendra gets fabricated with false allegations and was sentenced to jail where he gets killed.

Madhu and Amrit now finds shelter from Jayant who is none other than Madhu's brother who was a Police Officer himself. He later gets promoted as an ACP. When he tries to halt some illegal activities, he gets killed as well. Amrit was just 6 years old then and he witnesses the brutal murder.

Amrit vows to become a Police Officer despite having the intelligence of either becoming a Doctor or an IAS Officer. The people who were responsible for the death of his father and uncle comes back to haunt him as well. How did he deal with them and why does an NGO from Switzerland has paid fees to Adv Sukumar to appear for Amrit is the story.

Some of the characters which played a vital role in shaping of the story includes Sohan, Aditya, Smita, Shobha, Nisha, Sandy,Adarsh,Aman,Chaddha, Kakosa,Ajay.

The story has made all the above mentioned characters live in front of my eyes till it ended which shows how meticulously the story has been penned by the author. A great read, I must say.