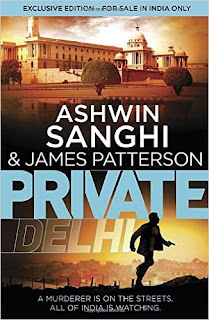 This is the second book in the Private series by the authors - Ashwin Sanghi and James Patterson. The first one is Private India. You can read the review of the first book Private India by clicking here

The authors has yet again given us a fast paced thriller and I realised that I spent a bit of my time in completing all the 112 chapters in one go. I also found it real difficult to differentiate as to which chapters were penned by Ashwin Sanghi and James Patterson.

The book is divided into 3 parts namely Killer, Deliverer and Martyr.

Santhosh Wagh is the protagonist, If you have read the first book, you would have known by now. He is employed as Head of India Operations for a detective agency called PRIVATE whose boss is Jack Morgan. Santhosh is ably assisted by Nisha Gandhe who lost her husband recently and a single mother to Maya Gandhe. The other person who assisted Santhosh is Neel Mehra who is a criminologist.

The story begins with a cold murder and Private has been deployed by CM to find out as to who is behind these cold blooded murders. On the other hand Lt Governor along with CoP tries to stall their progress. The focus shifts from one person to the other when one after the other starts getting murdered.

In between, you would also get to see another character Dr.O.S.Rangoon. Who is this person and what significance does he have on the story?

Both Santhosh & Nisha gets into trouble and were in the verge of getting killed. Who saved them?

You also have another character Khan who makes an appearance all of a sudden.When you were deeply engrossed in the turn of events, when the killer gets revealed, you will be surprised for sure just like it happened to me because the killer was there right in front of us throughout the story but authors has framed it so brilliantly that we ever had slightest of doubt on this person.

Who is the killer? Why were so many lives being taken away mercilessly?

Do read this novel to find out all the details. I bet it is worth the money.

The book is available in leading bookstores offline and online, you can buy either from Amazon or Flipkart.