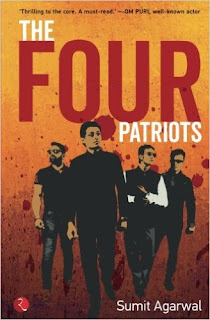 An amazing novel by Sumit. The first half was like an aeroplane running on the runway and the second half was similar to the take-off as it was fast paced. The story revolves around 4 characters Aditya, Raghav, Salman and Varun.

While each one has a different background and the story is set in different cities including Lucknow, Varanasi, New Delhi and Mumbai, these youngsters gets to join Naya Bharat Dal. By overcoming their own limitations in their personal life, these men becomes MP's and later Ministers in the Central Government with one of them even becoming a Prime Minister.

The story brings out the conspiracies that were hatched in the political arena by bringing defamation, kidnap, killing and attempted murder makes one understand the sheer grit the protagonists exhibit in defying the odds.

The story does not have a suspense element but that wasn't a deterrent factor to the flow which makes this novel a great read.