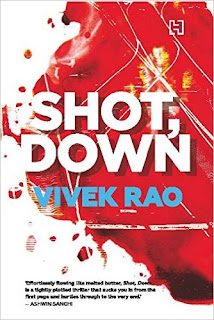 A perfect thriller novel that will make you to keep guessing from the beginning till the end. I was thoroughly impressed with the way the story was written which has taken off right from the start and maintained the same pace till the end.

Ajay comes to know about the demise of his brother Vishal Deshmukh and he senses something amiss when he saw his corpse. Though they were not in good terms prior, Ajay could not forget his little brother. He starts his investigation and stumbles upon one clue after the another. He gets ably assisted by Richa, Saif, Ashraf, Roy among others.

He also learns about his brother and regretted for not being there when he needed him the most. Ajay thought he was initially fighting against Vishal's employee Dr Nihal Kapoor aka NK but then he came to know that he was fighting a much bigger outfit.

What happens next is the story. It is a perfect movie material which would surely enthral the audience if shot with perfect screenplay and direction. A story that would make you feel happy, sad, patriotic and above all spine-chilled.

By the way, Vishal Deshmukh was aka SHOT!!