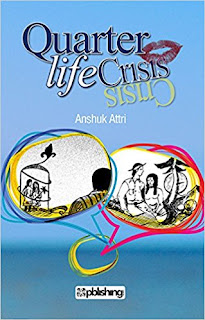 The book has a story which would serve as a learning factor for many of the youngsters who commit a mistake during their teens and repent later. The story touches upon the raw factor of being in relationship at a young age and getting pregnant on top of that.

While this may be a common scenario in western countries, we in India are still not moved towards that phase. The protagonist, Prachur liked and was in love with Neera. Their parents knew about this in little and did not show any negative signs towards it. Prachur had a loving parents and a sister - Innaya who always supported her younger brother.

Prachur had some friends in college. Neera's friends Yukti and Yashika played some role in the story both in the beginning and also in the later half. What they did is something very relevant to the flow of the story.

Prachur was shocked to find that Neera got pregnant but had n other option but to marry her against the will and wish of her parents. Thankfully he got a supporting parents who stood with him during the ordeal. Their baby girl Aadhya arrives but after that Prachur does something which puts a massive blot on his married life. What did he do? Would he manage to reconcile with his love life?

Read the story to find out where the author has beautifully narrated the incidents which makes this a worthy read. You can also get some free boos by joining Readers Cosmos.