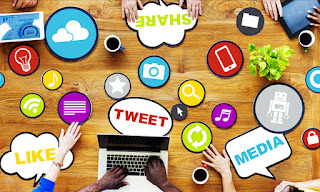 Digital Media is the most sought after medium these days. I would say, it started evolving with the advent of social networking platforms. Though they were there for sometime with the creation of World Wide Web(WWW) by Tim Berners Lee, it became real popular after the advent of Facebook and Twitter.

Big companies like AOL, Yahoo thrived those days with their valuation hitting few billions of dollars but they failed to innovate any further. This had seen their valuation falling down drastically after a decade since more innovative methods of advertising took its forte. Google which had a humble beginning calculated perfectly that the future depends on digital marketing and technology and invested heavily. Well, it does continue to invest even now. It was initially offered to another well known brand for a possible take over willingly by the founders Sergey Brin and Larry Page but was rubbished by the other brand. The rest is history. Google is now the biggest brand in the World.

The social networking sites changed the story altogether. Even though Orkut was the first to create a break through, since it was static, it did not flourish. On the other hand, Mark Zuckeberg came out with a revolutionary Facebook which has evolved from time to time and with the acquisition of WhatsApp, Instagram and few other platforms, Facebook has grown manifold which has steered its Founder to the Top 5 richest person on Earth.

Twitter is another platform where the brands leverage their presence by conducting campaigns from time to time. Digital Media has transformed the idea of advertising since it reaches the masses 24/7 at a fraction of a cost when compared to traditional way of advertising which includes Paper and Media. They have their own limitations though which cannot be denied but at the same time, it is becoming an effective platform from time to time.

We have software these days to effectively predict Impressions, Reach, Likes, Comments, Shares and Interactions which would give us a greater insight on the effectiveness of a campaign. It also gives us the freedom to spend - which means a person even with limited resources and funds can reach out to the masses on the other part of the world through "Targeted Marketing".

Digital Marketing also gives us the insights in a crisp format at the time we need rather than to wait for the entire campaign to get over. As mentioned, this is not completely fool proof due to the presence of some irrational elements who would want to use it for their enrichment through various unprofessional ways but is a safe bet for sure.

How would I not include Blogging here? Bloggers of various niche are most revered these days since they are deployed by major brands for a better reach out. These bloggers are classified under various niche which includes Technology, Food, Gadgets, Auto, Travel, Lifestyle, Parenting among others. Blogging platforms like Blogger, Wordpress help the bloggers by monetising their blogs through Google Adwords.

Digital Marketing has been embraced by many youngsters for their livelihood with many universities offering courses and certifications on the same. The presence of very many digital marketing agencies is also a testimonial to the fact that the concept is about to stay for a longer period.

On a personal note and experience, I have seen how the Digital Marketing has helped few brands and in specific - www.newspatrolling,com which is a news aggregator website which had a humble beginning but now boasts a Alexa Rank of 25,000 with some 146 sites linking back to it. The site gives a comprehensive coverage on various genre including Sports, Business, Politics - National & International, Coverage of Events etc. With an estimated reach of more than 700,000 through its channel partners,  the website has tied up with many other news brands for the distribution of its news. Do give it a look and add it to your favourites to get an up to date information on all the news.

Thanks for the informative content. Its true that digital media has changed the idea of advertising.