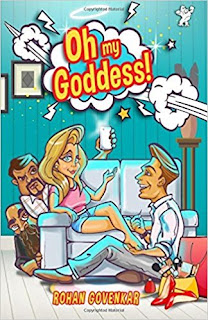 A nice plot which would make you engrossed with it from the beginning till the end. We would have used Oh My God(OMG) every now and then but for a change, this story is about Oh My Goddess!

I liked this way the story was conceived. It is an unusual story set up in an unusual way with some great twists. Trust me, you will never find as to who is the real culprit till the end and if you did, you are a genius.

The plot begins like this - Naveen completes his studies and in order to fulfil the favour extended to him for getting educated, he joins hands with Altaf Bhai who in turn had a connection with underworld don Sudhakar Shetty and joins Zaveri International Ltd where he meets his college days crush - Jessica and learns that she is none other than his boss's daughter.

On the other hand, Jackie and Kalpesh were into making some YouTube videos and wanted to make some quick bucks out of it. They did make some money but not as good as to support their living. They come up with a novel idea where they were sure about making a real big money and hires couple of artists.

Since they did video on real life incidents, they decided to get it shot in the Serenity Villa in Goa. It is at this place where Naveen and Jessica gets shifted after being kidnapped. Who kidnapped them and what happens in the story line which is coupled with some good twists involving cops and other characters.

The story has an unexpected ending but I presume it is good for the story because it is not the usual story you would have read earlier....

Good choice of title as well