Book Review - Demons In My Mind 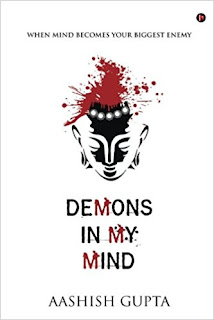 A beautiful story book that comprises of three different stories being merged into a single novel. A commendable work by the author, I must say. The uniqueness lies in the confluence of these three stories to form a single one which is beyond the imagination.

It all begins with a head of the village Dakshesh who was suffering from cancer wanted to meet "The Three Monks" who were revered among the villagers for their mystical powers. Since the whereabouts of them were not known as it was legendary story heard about them for generations, they weren't sure whether Dakshesh would manage to spot them but still heeded to his request and takes him to the place.

Dakshesh manages to see them but the Three Monks says that they were not GOD's as perceived and that they had their own dark past. They also warned him that he may not want to listen to their stories because there is no turning back.

The were none other than Rizwan, Murli and Joseph who had a different background and story that included murder, rape and love. Each were portrayed so very well by the author with some amazing poems and at places, the story goes iin the form of a conversation which were also effectively written making anyone who reads the story gets engrossed on them without feeling any boredom.

I have read so many stories of different genre but I can surely say this book is one of its kind with a unique story line which certainly needs appreciation and support.