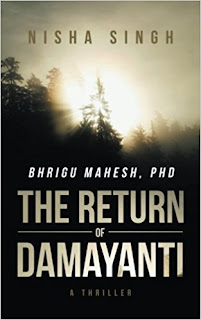 This is the second novel in the Bhrigu Mahesh PhD series. I have not read the first one yet though I got a chance to download it just few days back and after reading this book, I cannot actually wait to read the first one as well.

This is a 432 page lengthy novel but not even at a single place, you would find it boring since the author has written it so interestingly that you would not even think about skipping the pages. The story begins with an elderly retired Government servant named Nataraj Bhakti reaching out to the protagonist Bhrigu Mahesh asking him to help since he was haunted by his wife Damayanti who was dead a while ago.

Mahesh take up the assignment after the persuasion from Bhakti and reaches his village with his assistant Sutte. They witness something unusual in the initial days and though Sutte was convinced it was the handy work of Damayanti, Mahesh thinks it otherwise. He interrogates Chiranjeev, Bhakti's brother and his wife Premkala. He also earns that Mahesh's sister Savita was living with them. Though she said she had lost her husband, the reality was otherwise.

Mahesh also meets up with couple of other people Manjunath and Parichay Mishra(a Pundit) and when things were about to be decoded, Savita gets killed.

Did Damayanti's soul killed Savita?
What was the reason behind the killing and the motive of the killer?

The story revolves around so many incidents and characters which would make the reader to keep guessing as to what exactly was happening and whether it is related to supernatural stuff or that of a human one. The twists and turns that takes place making each and every character falling under the suspicious list is a good one as I feel has made this story interesting.

What happens in the end is a real surprise and when the motive was revealed, it is even more amazing because this is surely an unexpected twist in the tale since the character was very much unassuming leaving no way even to raise the slightest doubt about the involvement in disaster.

Read this novel and I am sure you would find it really interesting which would eventually make you o read the first one in the series as well.

This review is a part of the biggest Book Review Program for Indian Bloggers. Participate now to get free books!