Book Review - If you never try, you will never know 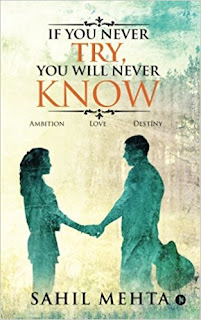 This is a debut book by Sahil Mehta but I must openly admit that it never looked like one. The story is a compelling one with a strong message "Follow your passion"

The ending of the story is not the usual one but the one with a positive message that would certainly appeal to the readers.

The Protagonist Robin Mehta was born in an affluent family and his dad always wanted him to join his business. His brother Suraj dies after having a spat with the father which shakes Robin very much. He also wanted to become a musician but his dad wanted him to complete his engineering degree and join their thriving business.

Robin meets up Aisha who comes as a breeze in his troubled life since he has lost his brother while his mother was dead, long ago. She brings a positive energy in his life and they both fall in love which has been explained very beautifully in the story. Just then, Robin invites her to meet his flat mate Jordan who very much resembled his brother Suraj but to Aisha's horror, there was no person like that.

Was Robin conversing with a ghost/unknown entity?

Just then everything was about to go in the right path, Robin takes a drastic decision. In the end, he emerges successful but did he get settled with his love life?

Read this interesting novel which will keep you hooked till the end.