What's the fuzz about Oviya in Bigg Boss?

Bigg Boss is a reality show which is been aired by STAR Group. After its initial success abroad where if you could remember how the bollywood actress Shilpa Shetty rose to fame all of a sudden due to racism. The only difference over here is, there is no racism.

While there are many theories running around this concept where some brainiacs has effectively pointed out few flaw saying that the entire show is doctored and was shot in 10 days or so, I have no comments. I respect their findings but at the same time, we should enjoy the show in its truest sense and should not look at each and every thing with a suspicion. If we did so, there will be no fun element in entertainment field. There has been thousands of memes being created about the contestants each showing their own support to their favorite stars and the key word BiggBoss Tamil and hashtags #OviyaArmy and #SaveOviya has been trending for so many days which shows how much rage the program has created. 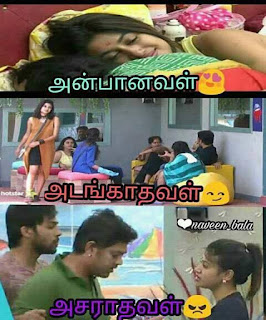 Actors are actors. We too act on a day to day basis. Take the example of "Jallikattu" fame Juliana. She rose to fandom with her bravery but in Bigg Boss show, things are totally different. She seems to be having a different face altogether which may be her true character. Just because we saw some one for sometime, we cannot certify his/her character. What was clearly evident until Day 27 is, inspite of Oviya calling out to her to lend her support when she had a fall and was suffering from pain, she twisted the story against her but will the camera lie? They do not. Despite knowing this fact, why do the contestants try to act smart?

Juliana even argued with Padmashri Kamal Hassan saying that it was misconception but Kamal Hassan clearly said it is not any of them and she may be suffering from Hallucination and she started creating a scene immediately after that. She opined that her image is being tarnished. Why would Vijay TV do that?

They gave her the bigger platform and it is her responsibility to make it a success. Isn't it? In this show, no one can blame any one because each and every one is responsible for their own action.

Coming to Oviya who is the rage these days which has even led to the creation of  #OviyaArmy in Facebook and Twitter. I have not seen her films and in fact I did skip the initial episodes of Bigg Boss for various unavoidable reasons. Having said that, when I started watching it, I felt she was uber cool. She has that never mind attitude which is what is required in this reality show.Most of the viewers felt she has been targeted by Juliana and Gayatri Raghuram with Namitha playing the dual role.

When a person gets a fan following just because of her attitude, that clearly indicates how cool he/she is. With celebrities like Simbu,Trisha, Venkat Prabhhu, Rithvika and few others coming to her support, Oviya has become a formidable force in this season. She is not perfect in all aspects as she has used "F" word and vowed to KamalHassan that she would not be using it again but her guts and carefree attitude along with her helping tendency showed that she is one among the favourites to win the Bigg Boss Season 1.

Hello sir, your web site is lovingly serviced and saved as much as date. So it should be, thanks for sharing this with us.
i also found some helpful sites like yours.

And in addition, I'm just always astounded about the amazing things offered from you. Some four facts following this site are undeniably the very best I've had.
Who Will Win Bigg Boss Season 12
Bigg Boss 12 Contestants List