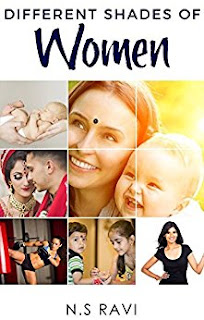 Different Shades Of Women is a unique book. I would say all the 8 short stories included in this beautiful book speaks about womanhood. It talks in detail about the emotions faced by women who don various roles in their lives - as a Child, Sister, Mother, Wife, Sister-in-Law, Mother-in-Law.

Each story talks about these roles in detail and would make you cry for sure. I would not talk much about the stories because it would become a spoiler otherwise. It talks about the general issues faced by women when it comes to claiming a share in the property, when being unable to conceive to give birth to a child, when falling in love, when forced to take the crucial decision to name a few.

When the women is seen as a mere puppet in the present world and is being portrayed as one even in some of the movies in general, author has portrayed them in a very respectful way which would bring out the emotions from any man, if he really appreciates a woman because it is she who has given birth of him. Read the book to appreciate the womanhood.