Book Review - The Heavens We Chase 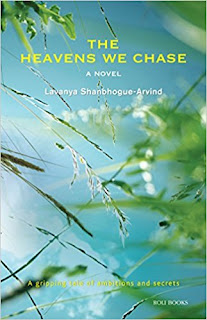 The Heavens We Chase is a novel written by Lavanya Shanbhogue - Arvind. The story was set in the Pre-Independence period. It revolves around two main characters namely Satyajit aka Satya and Saraswathi aka Sarah.

Since the story isn't a thriller or a crime genre, it moves slowly but at the same time, you wouldn't feel bored which is what I would say is the speciality of this novel. If you are a lover of classics, I am sure that you would appreciate this novel beyond any doubt but even otherwise, this would take us back to the past which would give you a first hand information on how the days were back then.

The story runs in two parts - one that of the protagonist Satya who wanted to become rich despite his background. He was an orphan since his mother dies of a snake bite and was charged with a brutal murder. Why and who did he murder and what happens next is an interesting plot.
He somehow overcomes his trouble and gets educated in Oxford. He had a friend by name Salmaan who helped him when he was in need of some accommodation initially and in turn he does an unbelievable act. Though Salmaan was angry, he did not avenge it but helps Satya. Why he does that is another point you would need to discover by reading this book.

Coming to the second part - it is about the girl who wanted to become a singer. Her father however does not approve it. She is Sarah. Who was her father and why he did not approve it? There was another love story for this character which brings out the difficulties of being brought up in a aristocratic family and the pros and cons attached to it.

The novel is not suitable for kids but having said that the incidents that warrants it were beautifully supported by the characters. It brings out the melancholy in both the characters in one way or the other. A great attempt in this fast paced world where most of the time, we run behind crime, thriller and horror and stories like these needs our appreciation and attention.