PINK - The Inside Story 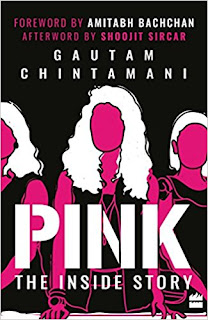 The movie PINK which was released in the year 2016 was known for various reasons. It was a critically acclaimed movie which got mixed response - both the Positive and Negative. This book is about the movie PINK and what all went into its making.

Usually, it is easy for us to criticise a movie by viewing it. I always had a strong belief that there is nothing called as a good or a bad movie and the reviews are usually biased which is either based on the reviewer's inclination towards the cast and crew of the movie or otherwise. For those who usually criticise a movie since there is no proper yardstick which defines which is a good movie and which one is not, this book comes as an eye opener.

The book recollects the events from the past that happened between the Ritesh Shah, Jitesh Shah, Shoojit Sircar, Aniruddha Roy Chowdhury and Ronnie Lahiri as to what made them come up with a unique concept like this and eventually ended up making the movie. The movie was actually not on cards when it was initially proposed but when couple of incidents happened in the life of Shoojit Sircar, he decided to go ahead with it.

The selection of cast and crew including the iconic Big B for his revered role and roping in the lead which included Tapsee Pannu, Kirti Kulhari and Andrea Tariang has been beautifully mentioned in the book which itself looked like watching a movie for me. Most of us wouldn't have forgotten the picture of Big B walking on the roads of Dehi without being identified when this movie was shot. The classic way of his approach towards his role in the film is a learning point for many youngsters who usually let the success go up on their head.

The co-operation extended by the stars and the way the movie took its shape is a real inspiring one. Read this book to know as to how it went ahead to become a commercially successful movie as well despite having such a strong message which was very much unlikely to be seen or portrayed in a bollywood movie.

Adding an icing to the cake is the presence of film's screenplay. Its time to re-live the moment!!