Book Review - To The Survivors 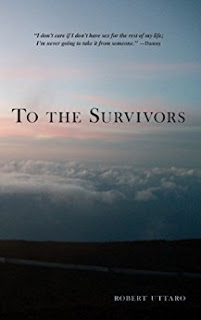 A book that brings out the darker side of life which often goes unnoticed since no one is willing to discuss about it. The book is about the rape survivors and how they came up strong leaving back the untold miseries that their life has brought on unknowingly and unsuspectingly.This is a common phenomenon across the globe with not so severe punishment given to the offenders but on the other hand, the victim is subject to lot of untold hardships. This book will be an eye-opener and would also serve as an inspiration for the affected who at times are forced to take some extreme steps.

Divided into 22 chapters, the author Robert Uttaro(Bobby) who has worked in THP(The Healing Place)as a volunteer counsellor for sex/rape victims mentions about how this .has evolved and how some of the rapists go scott-free including some priests who weren't punished but were transferred to other parish. The author is not critical about any religion as he rightfully points that there is a Supreme Force above us which we call/believe as GOD.

We from India wouldn't have forgotten the famous Nirbhaya case which became a sensation after it got wide coverage in the media but we hardly would have got to know as to how the affected family felt especially after losing their daughter to the brutal rape and the events that followed after that. While murder is something which is not in our hands to be prevented, suicide and intention to commit suicide can certainly be prevented. It was a real shocking one to me to read that even in a much developed country like US, people are sceptical to talk about rape and there is no much awareness spread among them to get counselling in case they were a victim or been affected in the past.

The very famous sex scandal case which has rocked the Hollywood came to limelight very recently and what was even more shocking was some of the reputed women artists were also a victim. I am glad that at least by now they all came out openly to talk about it which has cornered the once famed producer. Sadly, many of the artists even in the Indian film industry has spoken about it since they were influenced by the so called powerful producers and directors who wanted a sexual favour in return for casting them in the film.

The list is actually long. It happens in a household with domestic maid to corporate where promotions are given based on favours received, While I am not accusing all, it is happening across the country which no one talks about. At this juncture, I would also like to mention about our own helpline SNEHA which gives counselling to those who were affected by sexual abuse.

It is also to be noted here that child abuse is on the rise since the kids who were unsuspecting were subject to molestation which also needs greater awareness. This book is certainly an eye-opener and may be used a tool for reference. The best part that anyone could do is to deploy the RAPE SURVIVOR. It is difficult but can certainly do wonders because it is the affected who can understand things better and can drive the message in the right direction,
The book may not be exhaustive since the rape happens in different forms in different places but it gives insight of what exactly is a sexual assault and what the victim can do. A must read for all irrespective of country,creed,caste,religion and age.