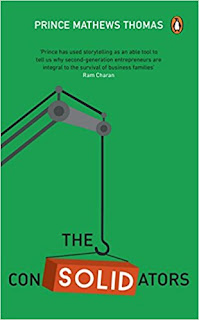 
There is a saying that "Castles aren't built overnight". When I read this book, I couldn't disagree with it as it portrayed the journey of some of the known names in a very meticulous manner. This book is very different from others since you cannot shrug it off saying that it is an autobiography but at the same time, the book I think for the first time ever has captured the stories of entrepreneurs who made it real big. Yes, they did inherit the business empire from their parents but having said that, these Second Gen entrepreneurs has not only retained the empire but has expanded them manifold.

The book has the stories of:

I am sure you wouldn't have come across all these names in a single book before though you would have heard about their life stories on individual occasions. I like the way author has written this book which is no less than a story but unlike the usual case, this isn't a fiction but based on real life incidents.

While I have liked the entire book as a whole, I have liked the story of Shri Rituraj Sinha of SiS Group Enterprises. There are few reasons behind it. Firstly there is a section called "My Learnings" in the end of each story which has the essence of what has made the life of these entrepreneurs a real successful one and to top it up, these were told by these eminent people themselves.

Secondly, there was this line which is a real effective one and if followed, can make anyone a successful entrepreneur. It says "Build the capability to ensure that each diversification also becomes a specialization". This is certainly an unique power phrase which you wouldn't have heard or come across before.

Rituraj Sinha was born in a affluent family. His father Shri R K Sinha who is addressed as RK in his circle is a First Gen entrepreneur who is also a BJP RS MP. He has built a business empire of Rs.25 Crore company but ever since Rituraj Sinha took over the reins from his father, the company had grown manifold that it touched the turnover of Rs.5,000 crore in just 15 years. This isn't a mean achievement. Similarly, his employee strength has also grown exponentially from 9,000 employees in 2002 to 150,000 employees in 2016.

I was really surprised that all these had happened by an accident. What started as a hobby became a full time profession. The company he founded SiS Group Enterprises went on to become India's 2nd biggest security company next only to G4S which is not an Indian company though. I liked the way as to how he transformed his failures into success. Not many would admit that they had faced failures but Rituraj Sinha was gracious enough to accept his failures which did not go as per his expectations but how he took it as a learning point and turned them to his advantage.

The chapter is exclusive since I remember seeing his company staffs (Dusters) work in an MNC BPO where I worked with such efficiency. I must admit that I have availed the services or product from all the above except of Oberoi realty and Radico Khaitan( I am a teetotaller but not my family)and now I understand as to what has gone into making these brands extremely successful and stand aside from its peers.

Give it a read. I am sure, you will not only fall in love with it but would surely recommend this book to your aspiring entrepreneur friends who can learn as to how they too can become successful without having to face the failures.....