My first ever sound gadget was this. How many of you remember? I am sure those who were born in the 80's of prior would have surely used this as a kid. 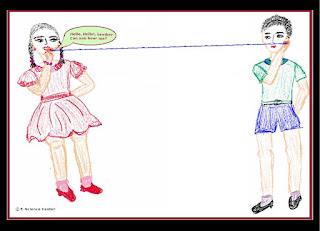 When I made it for the first time, my joy knew no bounds since I felt that was a real accomplishment. This was a simple gadget with an empty matchbox, 2 sticks and a thread with which the gadget was made which use to carry the sound from one end to another. They had its own limitations though. It cannot pass through walls. It cannot have bends as the sound carrying capacity would be distorted. Nevertheless, as a kid, I liked it a lot.

I have come across various gadgets since then which included the likes of tape-recorder, walkman which was really big and heavy and later when the technology developed, I started using headsets. Again these headsets differed from one brand to another. Some were heavy and some were ultralight. The rates were also fixed for these products depending upon the brand, make, color, weight and the specifications.

The speakers too those days use to be real big. I was of the notion, the bigger the speakers, the better the output and larger the sound/noise. The notion was never changed until I saw the BOSE Speakers which were really smaller in size and at times was as small as 1/20th its predecessors without compromising on quality and sound.

As a kid, I also remember using this which I am sure is being used by many of the kids.

My viewing experience too has changed drastically over the period of years. Thanks to the technology which has made this possible. From a Cathode Ray Tube(CRT's), I am now viewing it in LED. To make my viewing experience more personalised and amazing, the VR headsets are making it even more memorable. When I saw a movie on a VR Headset, I was totally amazed. I felt like I am living in that world.

Well, with the advent of technology, even the phones will be made flexible that one could bend(as the news goes by) and these would be a near possibility in the future which includes:

1. Goggles that could serve as a VR Headest
2. Goggles that would have in-built ultra-mini Bose Speakers and with this, when a person attends a wedding sangeet, each and every one will have their own choice and preference being delivered to them direct by the music host of the party by enabling a feature
3. Travel to any country in the world through VR without having to physically visit the place
4. Telecommunication from Earth to any of the other planets FREE of Cost (provided these were inhabited)
5. SOS enabled headsets to name a few.

Bose has certainly transformed the way we hear the sound. Its quality and impeccable record in this field cannot be emulated atleast for few decades as their products were visionary. You can change their range of mind blowing products here