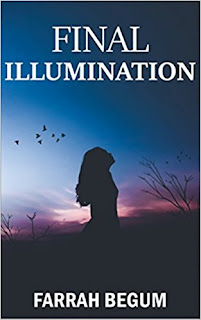 It was a pleasant evening on 9th Feb 2018 when I was invited for the book launch of "Final Illumination" by Farrah Begum. The event took place in Writer's Cafe in Royapuram from 6-7:30PM. The venue was a full house by the time event had begun. Author had come with her family. Few of her friends had also turned up to grace the occasion. The highlight of the event was the presence of Chief Guest who was none other than Neerja Malik. Author was very much particular in getting her as the Chief Guest and she had eventually succeeded. There were few reasons behind it. The main reason however is that the characters which portrayed similarities between Neerja Malik and Zubeida, who is the protagonist of this story who have fought bravely to come up in their lives.

Neerja Malik was at her usual best. She was pretty down to earth and was at her wit's end pulling other's legs, though not intentionally. She had broken the ice with her wits and made the event lively from the beginning till the end. She had also talked about how she had overcome cancer not once but twice briefly and said that people like her should be called "Cancer Conquerors" instead of Cancer Survivors. Despite not doing well for the past 4 days prior to the event, she made it a point to attend it since she was very much convinced with the story and the best part was that the entire story was narrated to her by the author herself. 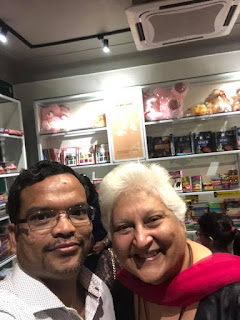 Quoting that, she had suggested that it would be a good idea to come out with a "Audio Book" as well as it would be even more appropriate and appealing since the author had used the right modulations in the voice while narrating the story. She was also kind enough to pose with us for a selfie once the event got over. 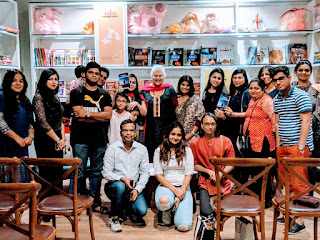 You can view the whole coverage here

Now let us talk about the review of the book:

This is a Novella and not like the usual lengthy stories. The beauty of the story is that it revolves around few characters with the main characters being Zubeida and Jude. The story talks about how a girl who was a witness of couple of major incidents in her life fights her depression and comes up. The story has a very good way of narration which brings forth in front of us as to what a girl feels when she was battling depression.

Usually there is a saying that "Best is to be preserved for the last". The story stands as a perfect testimony to that since the last 2 pages of this novella will make you cry, even if you are iron-willed/strong-hearted.

Considering this is the debut book by the author and that the story was written while she was pregnant with her second girl baby, the story needs all our support and appreciation since it is easy to say or think but when it comes to executing it, it is difficult most of the times.....