Vote your choice with MyVoteToday

We all have got accustomed to voting. Many of us would have voted when the paper ballot system of voting was followed to select our MLC/MLA/MP in a democratic way. As and when the technology progressed, we saw the introduction of EVMs which reduced the waiting time to a considerable extent. The joy of seeing our vote being flashed in the EVM can only be matched with the joy of seeing the candidate who we supported win.

Going by the above scenario, we can safely say that we are well versed with voting. Having said that, we nowadays come across voting in different formats in different channels. They cover topics from movies, entertainment, sports, politics and other current affairs. While some brands have been tried and tested by announcing the results of the polls conducted by them, many do not do it diligently. Even if they did, when it comes to announcing the results, they are not backed by actual figures, which play a vital role in ascertaining as to who has emerged triumphant.

MyVoteToday comes into picture as it has been into voting on social media for the past 25 months. Founded by Mr. Amit Bagaria on 26th January 2016, this ePollster has come a long way thrashing few records. It is already the World's 2nd Largest Social Media Pollster and achieved this feat in just 16 months. 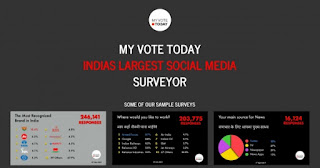 What has it achieved so far?

The brand achieved almost 24 million votes on its 2nd Anniversary which equates to 1 million votes a month or 32,873 votes a day on an average.

MyVoteToday (“MVT”) chooses the hot/trending topics and runs a survey (usually for 5-6 days) where lot of points on that particular topic gets posted by its team members. While the topics are mostly political, the brand also takes up and tweets about social issues, and at times, about sports and movies.

Multiple surveys (polls) are run simultaneously. For some of the surveys, the brand adopts a unique approach of running it with several rounds namely Pre-Qualifier, Qualifier, Pre QF, QF, SF and finally the Final Poll.

MVT has an in-house image/visual maker who makes the images corresponding to the particular poll with the brand logo on it. These are complimented with images which are sourced online.

When it comes to multiple polls involving different names, categories etc., MVT also generates LeaderBoard charts, which get shared with the public every now and then, and facilitate voters to know where exactly their choice stands/fares.

The brand also shares the vote counts when the poll has to go through several rounds and when the final results are declared, the number of votes that was received for that particular poll is revealed.

MVT has more than 741,700 followers, which includes eminent personalities from various fields, including Indian central government and state Ministers, several MPs and MLAs, several spokespersons of leading political parties in India, American Congressmen (equivalent to our Lok Sabha MPs), British MPs, as well as entertainment/sports personalities, who RT MVT’s tweets or engage with the brand tweet or do both, frequently.

You can vote for all topics/ open polls on the LIKES tab of @MyVoteToday on Twitter, or by downloading the app from Google Playstore or iOS App Store.