Book Review - I Owed You One 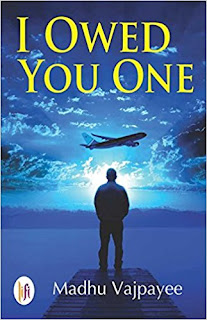 A novel which has captured the essence of various emotions - be it a son who was kept in the dark, a dutiful wife, a dutiful father, a faithful husband, a melancholy mistress etc., The story begins with the protagonist Dev Khanna narrating the incidents in his own words.

Been born in a wealthy family - both his Mother and Father had their own posh background, Dev notices a sadness in his mother. Despite enormous wealth and success, her mother could never be able to hide her disappointment whereas his father hardly spends any time with him.

While there was a dark secret behind it, Dev with the help of his college friend Javed finds out the exact reason which gives him the shock of his life. In the meanwhile, his mother gets diagnosed with advance stage of liver cancer which claims her life.

Dev leaves India for good and in another country he starts a fresh life. He happens to meet Radhika there and falls in love with her. Radhika had Indian roots though she was born and brought up in Australia and she was convinced that Dev was her perfect partner. While all was going well, Dev gets couple of big shocks which forces him to travel to India.

Dev comes to India. He gets entangled in some complex situations including a kidnap of a girl, a murder and losing a good friend to a mob. Dr Madhu Vajpayee has created some compelling events which brought forth some of the heart wrecking incidents which has happened (& is still happening) in a much appropriate way through her novel which is surely needs a mention here.

The characters were given appropriate roles and the events were stitched together perfectly which would make you feel that you are watching something in real rather than merely reading a novel. It captures the essence of how a mother feels when her daughter disappears, how a parent feel when their son is charred to death among others. A heart touching novel for sure....

This review is a part of the biggest Book Review Program for Indian Bloggers. Participate now to get free books!