Book Review - Dead To Them 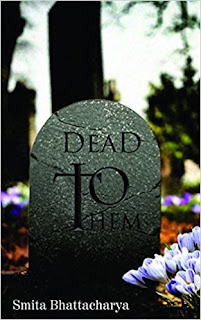 An unusual thriller fiction which would keep you guessing from the beginning till the end. It all begins with the disappearance of the protagonist Moira who was close with Misha and Avni.

When they try to unearth the reasons behind her disappearance, they stumble upon some bizarre truth which couldn't be taken by them as it is. Moira who is a happy go girl otherwise was friendly with all including other characters like Piyush, Kartik, Ashish among others.

Though she was suffering from some kind of depression and had taken medication, she did not leave any note when she disappears.

Was there a conspiracy behind her sudden disappearance?
If yes, who and why did they do?
Was she held for ransom?

Strangely her boss, Himanshu did not press for police charges. He felt uncomfortable when he was compelled to register one. Moira on the other hand before her disappearance receives a threatening letter.

Who was it from?

There were few other incidents that happens post this which would make you to complete this beautiful novel in one go.

Kudos to the author who has stitched the events together in a well organised way. Though initially I was confused with the presence of numerous characters, as and when I started giving more concentration to it, I could able to connect the dots easily. I can very well say that this novel can even have a sequel :-)