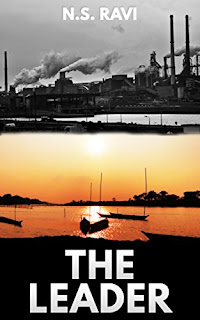 Who is a Leader?

When we are poised with this question, we usually tend to answer that it is the one who leads. When we are questioned further as to what the term "Lead" exactly refers to, many would not have an answer. The term "Lead" is a vast one though not vague but we tend to get confused. This is common for both the good and the bad things. We do have leader(s) who lead the public towards a general cause for the betterment of the society and we also have the leader(s) who mislead public.

Coming to the story. The story line was set almost 4 decades ago. Hence you would get to read the name of the cities as it is be it Bombay, Madras or Calcutta which is a nice feeling. The story revolves around few characters including Guptaji, Kakaji, Chaterjee, Keshwani, Guruji, Ankesh Modi and Lata.

Author has penned this story with such an intricacy that you would be surprised for sure. When I finished reading this book, I really wondered whether author has worked in this industry since the story is all about the textile industry where he has mentioned about most of the details in such a subtle manner. It begins with the death of Kakaji, a labour leader and then goes back to the beginning. Guptaji was a shrewd businessman and he had business competition with Keshwani. Guptaji had an adopted daughter Lata who gets married to Anvesh.

Anvesh had BIG dreams of making it big in the league of textiles. He was always shadowed by his father-in-law Guptaji. He makes some plans and makes use of Guruji. What did transpire in the end is the story.

I liked the way the story was narrated because the author did not miss anything at all. He tried to include all the possible events that could happen in a textile industry which includes opening an entity in a tax free haven. The story would make even a person who has literally no knowledge about what happens in the background in the textile industry be equipped and aware of all the happenings. A brilliant attempt.