Book Review - Men and Dreams In The Dhauladhar 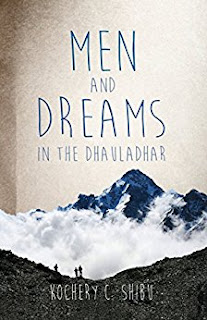 Men And The Dreams In The Dhauladhar is a perfect confluence of stories drawn out parallel from three different persona which gets merged in that place. It all begins with the construction of a hydro-electric project.

The protagonists were Nanda, Kusru and Rekha. All three of them had a secret past which they did not wanted to recall or talk about.

Why did they want to avoid speaking about it?

The book touches upon various sensitive issues including falling in love, though it isn't a sin but when you do it after being married, is certainly the one. One would not feel the agony until they lose their spouse cursing themselves forever for being the reason for their demise.

The story also touches upon how the workers who came as migrants from other nation were exploited and how their death gets covered up and for what reason which was really moving. Though I initially felt that there were too many characters to remember, I then felt that none of them could be missed. I would recommend you to make a note, if you are forgetful in nature.

How partition has affected the life of people across the border, how the produce like milk, wool were being bought at lower price, the destruction that came with the cloud burst were mentioned in great detail. The story could have been little bit shorter, is what I felt, honestly.

When the lives were at stake, the story starts picking up the pace. Yes. It gets real interesting only after the first half. So, if you got bored till then, do not lose your hope because it takes up only after that.

You would be intrigued when each chapter which has Nanda ends with "What the Dhauladhar wanted to tell him?" and yes, you would find about it in the end which was really a strong message that the author has driven.

I must say this is not the usual story but the story with a difference. Give it a read. I am sure you will like it.