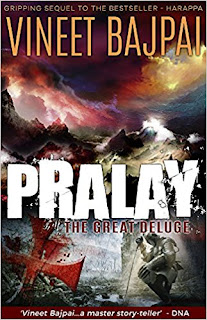 Vineet Bajpai is back again with PRALAY - The Great Deluge which is a sequel to his best seller Harappa - The Curse Of the Blood River. So it is imperative that you have read the previous edition to so that you would get to understand the story much better.

As mentioned by DNA, when you finish reading his books, you would surely agree that Vineet is a master story-teller. Hindustan Times has referred him as India's Dan Brown which is also really apt.

Those who have read the prequel, I am sure you would enjoy this book and to our delight, the story isn't ending with this book. There is another one coming out for this brilliant plot to be concluded - Kashi - Secret of the Black Temple.

Pralay - The Deluge is set in two different time periods. One during the Harappan period and one at the present time. Vivasvan Pujari who was a Devta gets deceived by Asura who unleashes attack on his own people. But when he realises the truth, it was too late to reverse his actions and the entire nation faces the wrath.

How was he deceived?
Did he find a way to redemption?
Has the curse which was unleashed on him got reversed?

Manu who was born to Vivasvan meets Matsya. Matsya did not looks like an ordinary person to him. He wields enormous powers which was beyond the comparison and he addressed Manu as "Satyavrata".

Why did he do so?
Who is Matsya?

The above is one part of the story. On the other side, there is this story happening at the present time which has the protagonist Vidyut. In this part, he gets the support of Dwarka Shastri who was the world's only param-taantric but they face a threat from Trijat Kapaalik aka Masaan-raja.

The only connecting point between the two is The Black Temple. What lies in this highly secretive temple and who guards this place? What is the connect between two different periods?

Read this story which would keep you at the edge of the seat till the end.

Author has penned the story very meticulously and has combined few real facts with the fiction. You would not feel bored at any given point. The sequence of events, the sudden turnaround in the scenario makes this story a compelling read.

This book review is a part of "The Readers Cosmos Book Review Program and Blog Tours, for details log on to " http://www.thereaderscosmos.com/ "