Book Review - A Cage of Desire 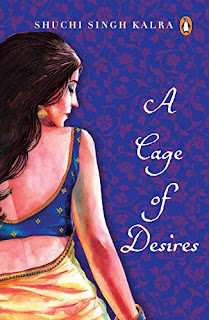 
The story is not for kids but having said that, the story is one of the best I have read in the recent days. I could say with confidence that the story reflects the mindset of a Woman who has been used in the society by the Men for their own lust and desires. The book made me feel that I am not reading it but watching it in real. Yes. The story calls no less than to be made into a bollywood movie. The message is very clear and strong. Women cannot be betrayed and they should not be taken as granted because when they burst, it would be unbearable.

I must say that this book wouldn't have been published at the time when #MeToo is making waves across the globe where many of the celebrity women have come out openly to talk about their secretive private lives as to how they were abused when they were the early entrant into the movie industry. Hats Off to the author who has bravely put up this in the form of a story.

I wouldn't want to talk much about the story as such because by now you would have understood the theme of the book. It was real interesting to read each and every page with utmost care as it brought out untold emotions which was overflowing from the character - the protagonist - Renu.

She had another face. Despite being a mother of two, she was never given the place she always had yearned for in her life by her spouse. What transpires the change in her life to become a revolutionary figure deserves a big applause.