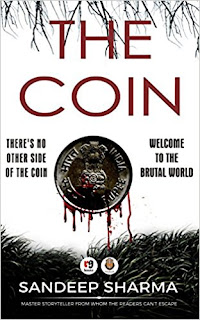 A story which has been written really well from the beginning but would have made it a real good one had it ended well. Yes. Honestly I did not liked the climax. I wouldn't say it would be the same when you finish reading it. Perceptions may differ. You might like the way the story ends.

I wasn't happy about the editing bit. If the edit was done properly, the story would have sounded much much better. I have read few of Sandeep's books and I am sure he would take this as a constructive criticism to come out with stories which would make the readers go gaga about it.

The story begins with a murder and the murderer rather than being cautious, sends a video to the cops direct thereby provoking them to try and find out as to who he is. Ronak Upadhyay, the cop who has handled a case similar to this in his career springs into action and starts digging into it and stumbles upon few evidences. While the previous convict was still behind the bars, the murder continues.

Who does this?
How was he/she being caught?

Read the story to find out more as to how these murders were done and who was behind it and the motive for these gruesome murders.