Book Review - Let You Be My Puppet Once 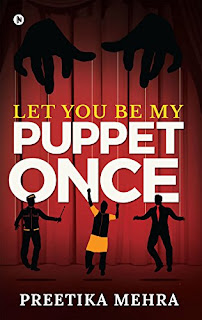 The story has few characters. Saima, Josh, Vedica and Karan. While Saima hailed from an affluent business family, Josh's father runs a small shop in Kerala. Vedica had a background which no one would have expected. Karan's father served as Commissioner of Income Tax.

Despite being so much powerful and hailing from affluent background, they were on their toes after the sudden death of Saima's sister Meghna.

What had caused her death?

Author talks in great detail about the politics where kickbacks and commission were the norms. This is where Rana and Pratap comes into picture. While Rana served as Chief Minister of a State, Pratap was in the Central Govt as Natural Resources Minister.

Rana had two sons - Kapil and Suraj whereas Pratap had a son named Zoravar. What would usually happen when the spoiled brats comes together has been explained very well in the story. They were known to Saima since her father Swaraj had business dealings with these politicians.

When thins goes awry, it ends in few being eliminated making the others to go on hiding. But who was responsible for these deaths and how was the plan executed and how did the murderer managed to escape the eagle eyes despite deploying forces from UAE, Australia and most importantly from USA where even FBI gets deployed.

The book is full of surprises and I am sure you would surely be loving it once you finish reading it. Go for it today.