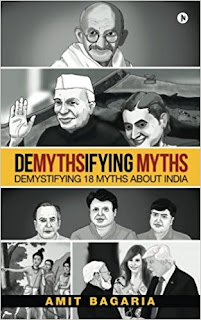 We have heard about lot of things about our leaders and their past. We wouldn't be in a position to recollect all of them including the facts and reality. Through this book, the author has busted those myths which we were long made to believe it as TRUE.

A genuine attempt which clearly points out the shortcomings across various system in our country including that of the presence of RajyaSabha, President and lot others. He has touched upon various sensitive issues but has compiled the chapters in such a way that it would make the readers think twice before coming to a conclusion.

There are 18 chapters in total and each discusses about a unique issue which is prevalent in India before and after the Independence. This includes the mysterious deaths of various leaders during the Congress Era, ceding a much bigger landmass to Pakistan for a minuscule population, saying NO to the UNSC Permanent Seat and referring the same to China and lot more.

Though this is very much of a political book, the stories that were covered in the book would make it an interesting read. If you wanted to know about lot of aspects which has always remained a myth to you till date, do give it a read. You will not regret.

The book is available on Amazon and all leading bookstores.